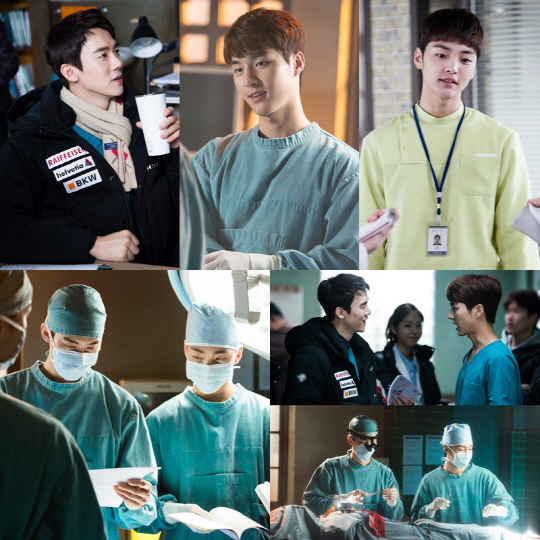 “Romantic Doctor Kim” Gives Inside Look At Actors During Rehearsal

SBS’s Monday-Tuesday drama “Romantic Doctor Kim” gave a sneak peek on how the actors rest during their break time by sharing new photos.

One photo shows Yoo Yeon Seok wearing a coat and scarf to fight against the cold on set. Despite the chilly weather, his warm smile will definitely melt fans’ hearts.

Taking a break from the surgery scene, actor Yang Se Jong starts a friendly conversation with his co-actors, showing a more amiable side of him than that of his cold on-screen character. In another photo, actor Kim Min Jae is cutely spacing out.

Yoo Yeon Seok and Yang Se Jong are also rehearsing their fight scene in another photo. When they practiced for this scene face-to-face, their tension made the rehearsal feel like the actual take and silenced the filming set. But right after they said their lines, both of them burst out laughing and their bromance heated the atmosphere.

Lastly, the remaining two photos show Yoo Yeon Seok and Kim Min Jae hard at work in the surgery room. There are many scenes in the drama where the doctor and nurse perform surgeries together, so the actors’ chemistry is improving day by day. The amount of passion and dedication they have for this drama shows just by watching them study their scripts and do simulations with surgical tools.