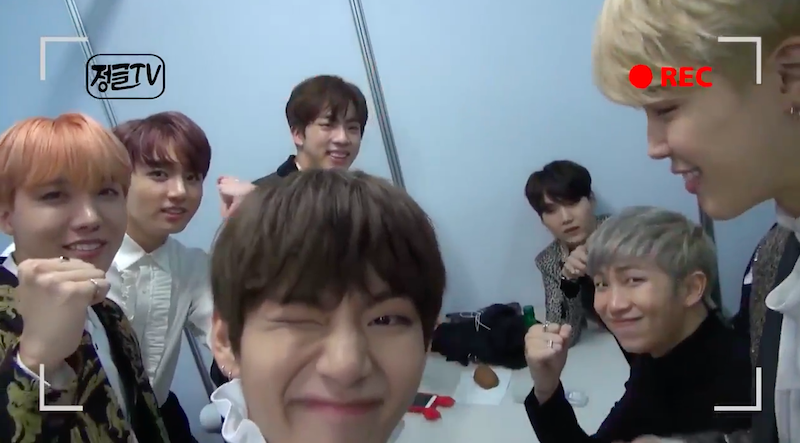 Watch: BTS Cheers On Jin And Debates His Likelihood Of Survival In The Jungle In New “Law Of The Jungle” Clip

SBS’s “Law of the Jungle” has shared a fun clip featuring the guys of BTS expressing both their support and worries before their eldest member Jin headed off to Indonesia to film the show’s upcoming season.

The video appears to have been filmed backstage at the Melon Music Awards on November 19, with Jimin starting off the clip by expressing his worries about Jin going to the jungle. “He really can’t stand being hungry,” pointed out Jimin. “When he goes to the jungle, we’re going to be on a break. So I hope that he’ll make good memories that will be more valuable than a break for him, and come back after filming with good people.”

The video then showed the rest of the group members in their dressing area, with Jungkook boasting with a smile, “If I had been the one going, I would have cooked well and been good at catching fish.”

Suga then joked, “If I went to the jungle, I’d be the celebrity who would most easily die of starvation.” Member V, who was filming the clip, jumped in to add that Rap Monster would be in second place, which Rap Monster tried to deny.

Rap Monster confessed that he wasn’t sure how Jin would fare in the jungle, guessing that he’d either do surprisingly well or die. “I think he’ll do well!” insisted Suga from beside him. Rap Monster asked Jin if he had tried researching survival tips, and Jin replied, “Fans have given me a lot of books about the jungle!”

Jimin then said again that he was worried about Jin because he’s so sensitive when it comes to food. Suga assured Jimin that Jin would be fine because he’s good at getting along with guys who are older than him, and also because it’s a matter of life or death. Jimin joked, “More importantly, he’ll do well because it’ll be on television!”

After Jin cracked himself up by making a pun about his new lobster phone case, the guys cheered him on by yelling “Fighting!”. Watch the clip below.

Jin also recently shared photos on the group’s Twitter account of himself packing an ARMY Bomb (BTS fan light stick) in his luggage before he headed to the jungle.

The premiere episode of the new season of “Law of the Jungle,” which features guests Jin, Cosmic Girls’s Cheng Xiao, Gong Myung, and more, will air on January 6 at 10 p.m. KST on SBS.

BTS
Rap Monster
Law of the Jungle
Jungkook
Suga
Jin
Jimin
V
How does this article make you feel?