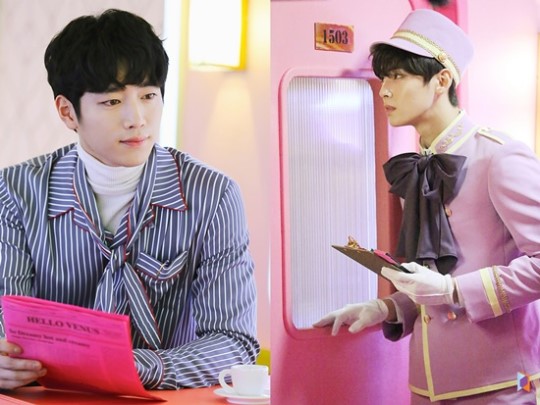 It has been revealed previously that actor Seo Kang Joon will be starring on Hello Venus’s new music video, but he isn’t the only one. ASTRO’s Cha Eun Woo is also supporting his agency sisters, Hello Venus, by making an appearance on their new music video for “Mysterious.”

In the cuts provided by Fantagio Music, Seo Kang Joon is looking like a gentleman, while Cha Eun Woo is dressed as a train ticket agent and peering suspiciously into a train cabin. During the filming, Seo Kang Joon and Cha Eun Woo reportedly had the staff in awe with their detailed portrayal of emotions. The two men’s eye-catching visuals add to fans’ expectations about the music video.

A source from Fantagio Music explained, “Seo Kang Joon and Cha Eun Woo agreed to appear on Hello Venus’s music video to support them despite their busy schedules. They have been helping each other out as agency family members ever since they were trainees, and that was why we were able to complete the recording amid a very pleasant atmosphere.”

Hello Venus will be making a comeback with their sixth mini album, “Mystery of VENUS,” on January 11. They have already dropped their music video teaser so go you can go check it out!