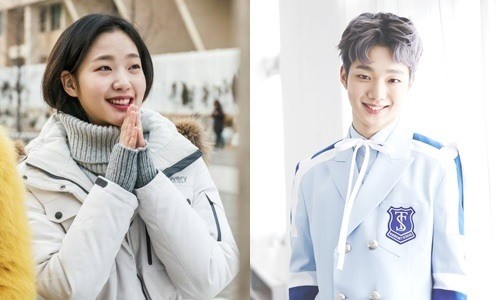 Netizens are perplexed as pictures of an idol who looks just like the actress Kim Go Eun surface. Is she releasing an album? Or is Ji Eun Tak from “Goblin” suddenly making an idol debut?

The person in the famous picture is in fact Kyeongha, the youngest member of the rookie group TopSecret. He has monolid eyes, pale skin, and the signature pure smile that Kim Go Eun is famous for, so it’s no mystery why netizens are confused.

Kyeongha himself relayed his feelings to news outlet Herald POP. He expressed, “I’m very honored. I have had many people tell me that I have the face of a female celebrity, but this is the first time I was told that I look like Kim Go Eun. I’m even happier because I’m a big fan of ‘Goblin,’ and it’s great to be getting attention for looking like the main character of the drama.”

TopSecret has just released their debut album “Time’s Up” on January 4, beginning their activities with their title song “She.” The song is an upbeat dance track with a funky beat, and it shows the feelings of being attracted to one’s inner beauty rather than looks. Prior to debut, TopSecret had been busy with overseas promotions in countries like Japan, Taiwan, and the Philippines.

“Thank you, everyone, for your attention. We’ve just debuted so we’re still in the stages of improving,” Kyeongha added. “We’ll work even harder so please keep an eye on us.”

Were you also surprised by the resemblance?

Kim Go Eun
TopSecret
Kyeongha (TopSecret)
How does this article make you feel?