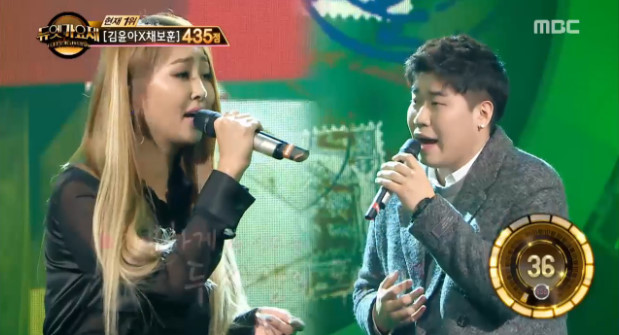 SISTAR’s Hyorin took to the stage in a powerful performance on MBC’s “Duet Song Festival” that brought the panel to its feet.

The January 6 episode saw Hyorin pair up with Jo Yong Woo as they sang “Good Bye” by Jung Jae Wook with the soft accompaniment of the piano and strings. Even before their performance, when the other contestants saw who they were up against, they knew that it was going to be a uphill battle, with MAMAMOO’s Wheein saying that among the girl groups, Hyorin is the top.

Although their performance started off light and soft, as the song progressed, the duet became more emotional as their husky voices mixed together. After their performance, Sung Si Kyung praised the duet, saying that Jo Yong Woo, in particular, possesses an impressive array of vocal abilities as he sings.