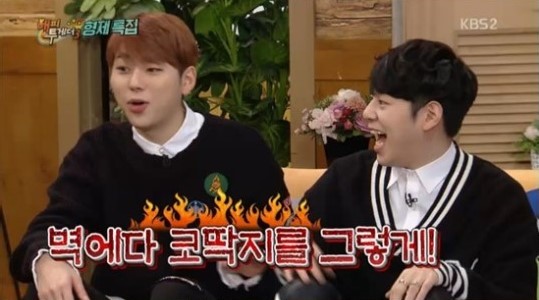 Like any good sibling is wont to do, Woo Taewoon did not hold back at all as he thoroughly exposed his little brother Zico’s secrets for all to know. But things don’t often go as planned, especially when you have a kid brother like Block B’s Zico.

Both brothers appeared as guests for the “Who’s Your Mama” special on KBS 2TV’s “Happy Together.”

Woo Taewoon’s guest appearance was a cause for excitement as the artist has not been on variety shows for a long time. On the other hand, Zico, was the only one sweating in his seat.

The older brother went first, sharing anecdotes about himself and Zico, but subsequently found himself busily deflecting Zico’s counterattacks. The little brother had a ton of complaints about how he had suffered during Woo Tae Woon’s teenage rebellion phase, as well as a whole arsenal of secrets about his older brother that he revealed one by one. 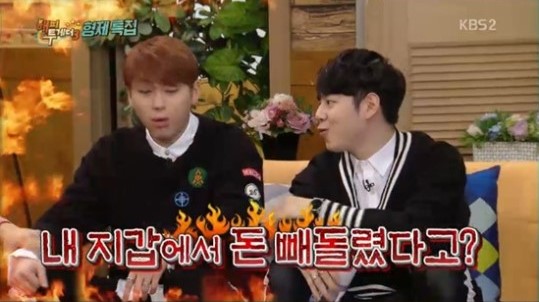 When asked if he hit Zico often during their schooldays, Woo Taewoon said it was because Zico would do things like sticking his boogers on the wall. He also admitted to waking Zico up in a rage because the latter had eaten all his chicken, and to wearing the new clothes that Zico had saved up to buy.

The brothers then did a switch with the other brother pair, Yang Se Hyung and Yang Se Chan. Yang Se Hyung reenacted the chicken episode with Zico, and gave a cool response instead, prompting Woo Taewoon to jump up with hilariously flimsy defenses like “That chicken money was all I had” and “I am a glutton!”

The MC also asked the brothers if their parents favored either of them. Zico’s reply was, “It differs over time. When my brother appeared on ‘Show Me The Money,’ it was him… nowadays it’s me…” 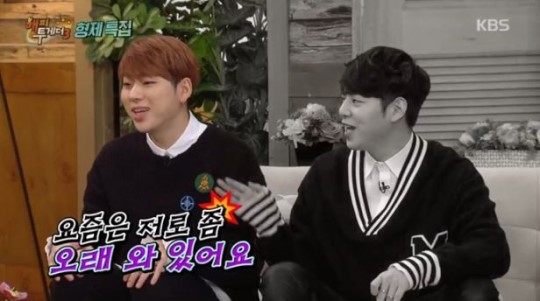 Talking about when he truly felt the level of Zico’s popularity, Woo Taewoon said that he often uses formal speech with his little brother now. When he calls Zico, he’ll start out with informal speech first, and then tag on an honorific ending behind. He explained, “The gap has grown bigger, so I can’t [interact with him] easily.”

How similar are your sibling dynamics to Zico and Woo Taewoon’s?

You can also watch the full episode below!

Block B
Woo Taewoon
Happy Together
Zico
How does this article make you feel?