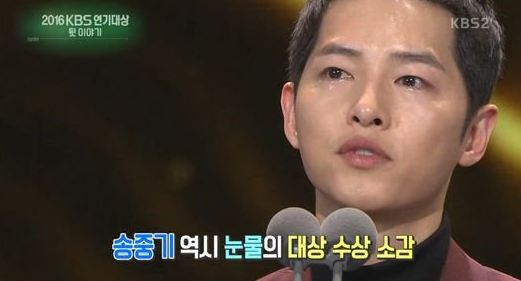 Actor Song Joong Ki finally gave an explanation for his many tears last month at the 2016 KBS Drama Awards.

The January 7 episode of the KBS 2TV show “Entertainment Weekly” featured an interview with the actor backstage after he had won the Grand Award for his role in the hit drama “Descendants of the Sun.”

During his speech, Song Joong Ki could not hold back on his tears and afterwards when the cameras caught up with him and asked him why, he answered thoughtfully, saying, “Tears came as I thought about the set while we were filming the drama. I want to give my thanks to the staff on the drama one more time.”

Song Joong Ki
Entertainment Weekly
How does this article make you feel?