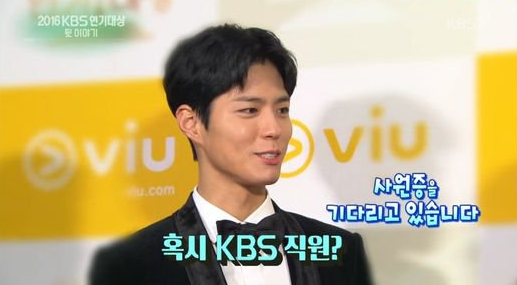 Park Bo Gum had the perfect response to a funny question about his KBS loyalties during an interview on “Entertainment Weekly.”

The January 7 episode of “Entertainment Weekly” featured backstage interviews at the 2016 KBS Drama Awards, which saw the talented actor winning the Male Top Excellence Award for his role in the hit drama “Moonlight Drawn By Clouds.”

Before the event started, Park Bo Gum was asked about his many hosting duties for KBS, since he had been the host for the 2016 KBS Song Festival with AOA’s Seolhyun as well as the 2016 KBS Drama Awards. When asked, “Are you an employee of KBS?,” Park Bo Gum wittily replied, “I’m waiting for my employee ID card.”

Park Bo Gum
Entertainment Weekly
How does this article make you feel?