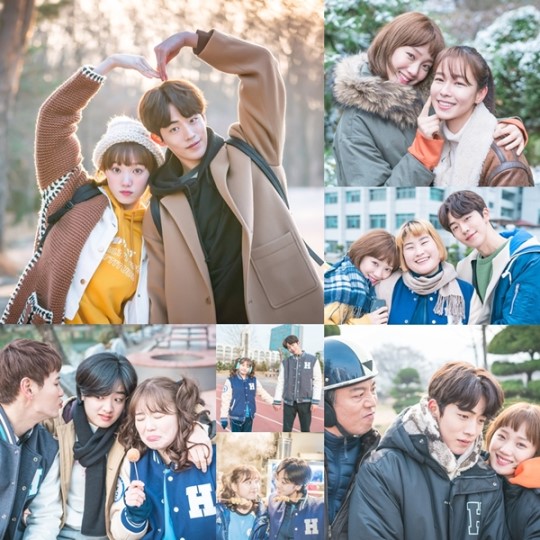 Behind-the-scenes cuts of “Weightlifting Fairy Kim Bok Joo” have been released, as the drama prepares to bid goodbye to its viewers.

In the cuts, the actors assume adorable and playful poses for the camera. There’s our favorite couple Nam Joo Hyuk and Lee Sung Kyung making a heart with their arms, cuddling up to Jo Mi Nyeo who plays the funky-haired weightlifting senior, and being glared at by Ahn Gil Kang, who plays the fierce dad with a tender heart.

There’s also a hint at the Lee Joo Young and Ji Il Joo (Tae Kwon) couple, as he puckers his lips at her. Sadly (yet hilariously), her and Jo Hye Jung’s expressions aren’t very encouraging. Jo Hye Jung also stars in a temporary side pairing with Nam Joo Hyuk in the shot where they’re both holding hands.

It’s evident that the actors have built a strong camaraderie during the six months of filming, and perhaps this is part of the reason why viewers have genuinely felt warmed by watching the sweet drama in these cold winter months.

The final episode of “Weightlifting Fairy Kim Bok Joo” will air on January 11.

Relive all the funny and heartwarming moments of the drama below!