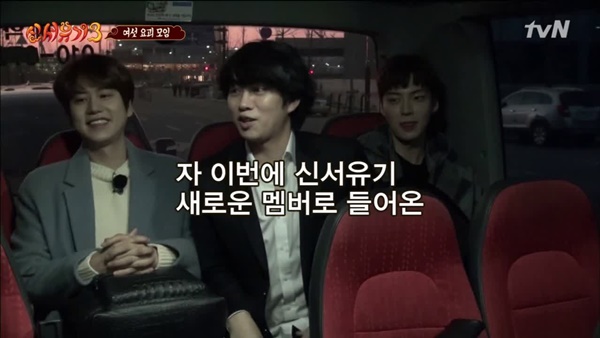 Super Junior loves to show their affection by teasing each other!

In the first episode of tvN’s “New Journey to the West 3,” which was aired on January 8, Super Junior’s Kyuhyun, Eun Ji Won, Ahn Jae Hyun, and WINNER’s Song Mino were waiting for their fellow cast members Lee Soo Geun and Kang Ho Dong to finish their filming for “Ask Us Anything.”

Just then, Kyuhyun’s bandmate Kim Heechul, also part of “Ask Us Anything,” suddenly arrived, and assimilated himself into the program naturally as he jokingly introduced himself as the new member of “New Journey to the West 3.” He then started to host in an old-fashioned style, which the producing director (PD) Na Young Suk promptly teased him for. But he brightly explained, “Because I’m working with Kang Ho Dong, I often talk like a host from the old days.”

Before he left, Kim Heechul complimented Song Mino, saying, “Really praiseworthy, WINNER. The world’s true winner.” He also left Ahn Jae Hyun with a brief but impactful greeting as he told him, “I love you very much.”

Update: This article has been edited to correct the name of the broadcast network.

Super Junior
Kyuhyun
Kim Heechul
New Journey to the West 3
How does this article make you feel?