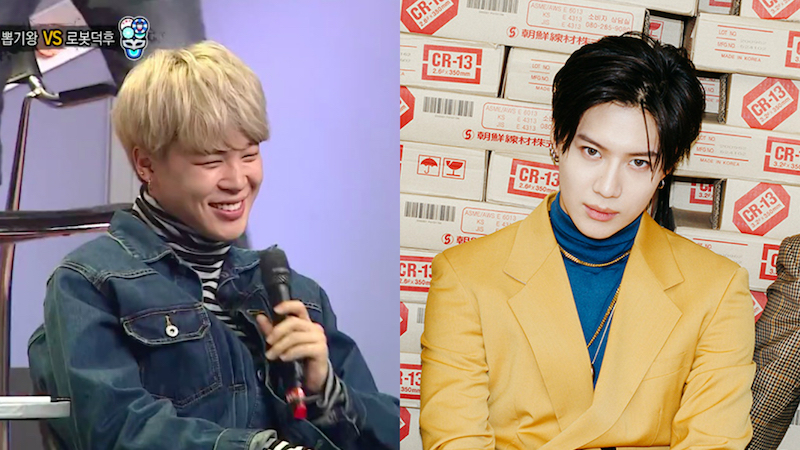 Watch: BTS’s Jimin Shares His Opinion On Whether “King Of Masked Singer” Contestant Is His Friend Taemin Of SHINee

While appearing on January 8’s episode of “King of Masked Singer” as a guest panelist, BTS’s Jimin shared his thoughts about whether or not one of the disguised contestants might be Jimin’s good friend Taemin of SHINee.

In one of the competition’s first rounds, the contestants King Of Toy Machines and Robot Fanatic went head-to-head with a duet cover of Deux’s “Look Back At Me,” in which they even busted out some dance moves. 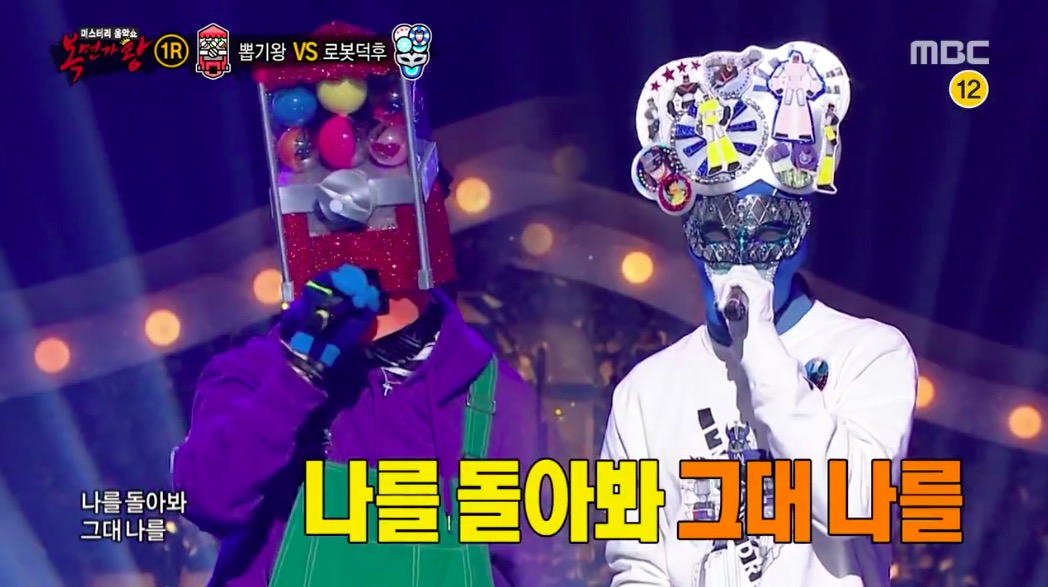 When host Kim Sung Joo talked to the panelists about their opinions of the singers’s voices and asked them to guess their identity, Jimin guessed that both of the contestants in the round were teenagers, and said they seemed like they may have debuted after him. “It seems like I’m the only one who thinks that though,” he admitted as he looked at the other panelists with a nervous smile. 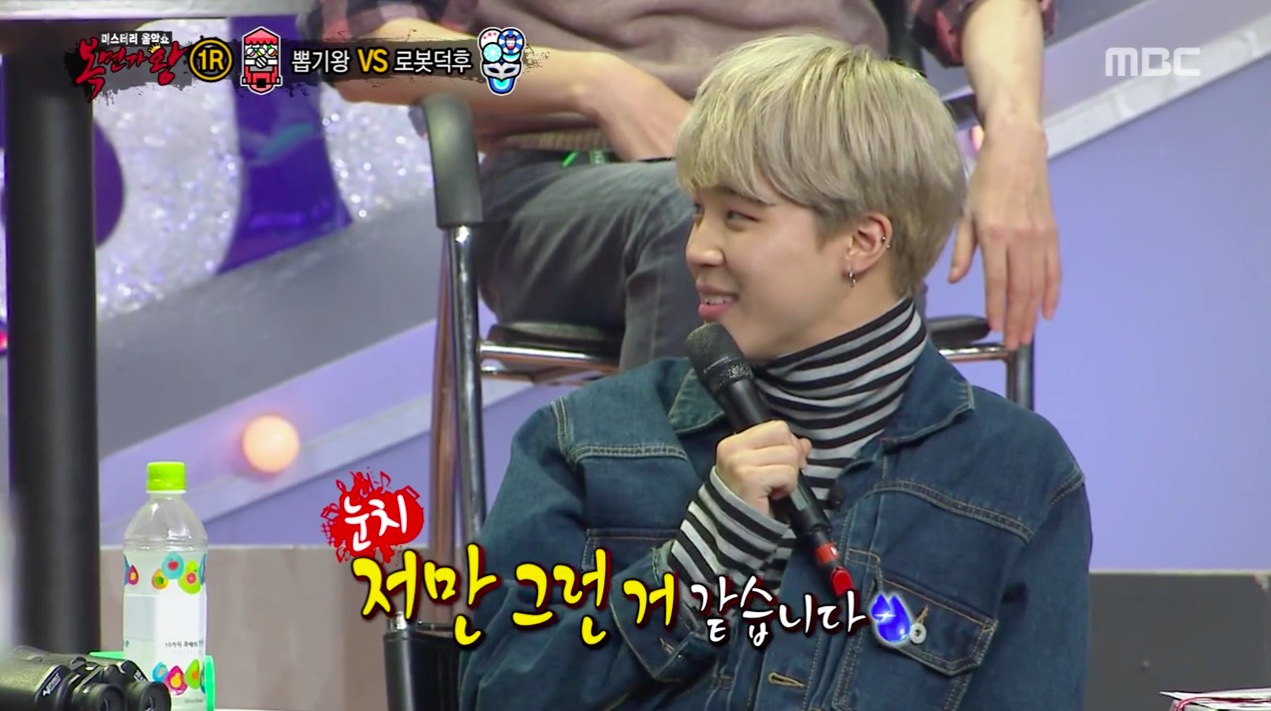 The two contestants were later asked to perform a talent for everyone. One of Robot Fanatic’s proclaimed talents was kicking both legs in the air repeatedly while breakdancing, but he cracked everyone up by falling back during his demonstration and pretending to look dejected on the floor.

After the talent portion, panelist Lee Yoon Suk took a shot at guessing the identity of Robot Fanatic. “His voice is very sweet and beautiful, and he’s very good at dancing,” he said. “I think he’s Korea’s Michael Jackson, SHINee’s Taemin!”

Jimin couldn’t hold back his skepticism and turned back to look at Lee Yoon Suk in surprise. When asked about his reaction, Jimin replied, “I don’t think it is. I think Taemin dances a lot better.” 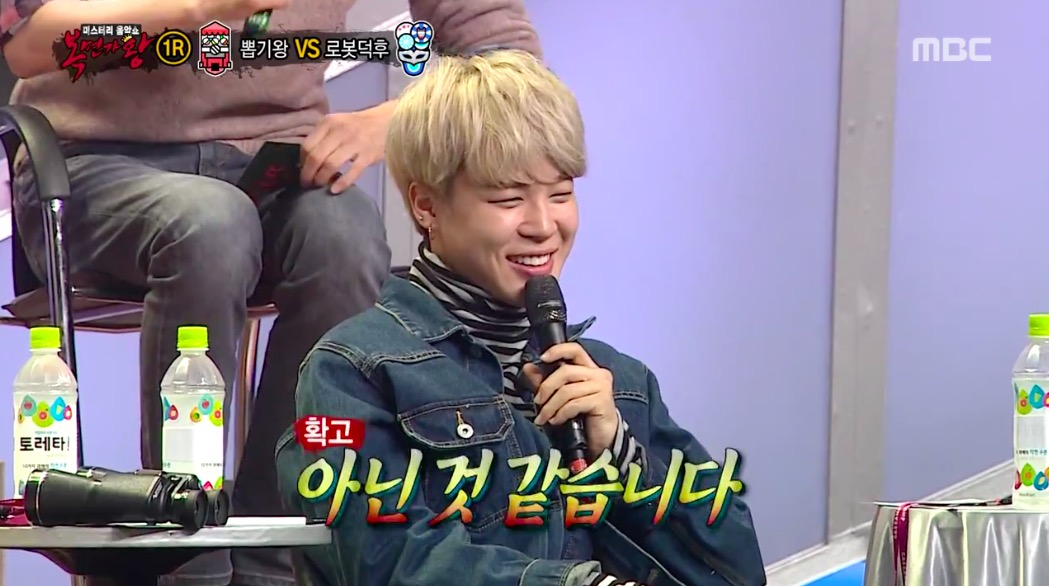 Shin Bong Sun then asked Jimin if he thought Robot Fanatic was possibly INFINITE’s Sungjong, because she thought his voice was similar. Jimin hesitated before he commented, “It won’t be good if it turns out he’s my senior!” Everyone cracked up at Jimin realizing his mistake, as he laughed and covered his face. “Because I think I spoke without thinking it through earlier!” he said. 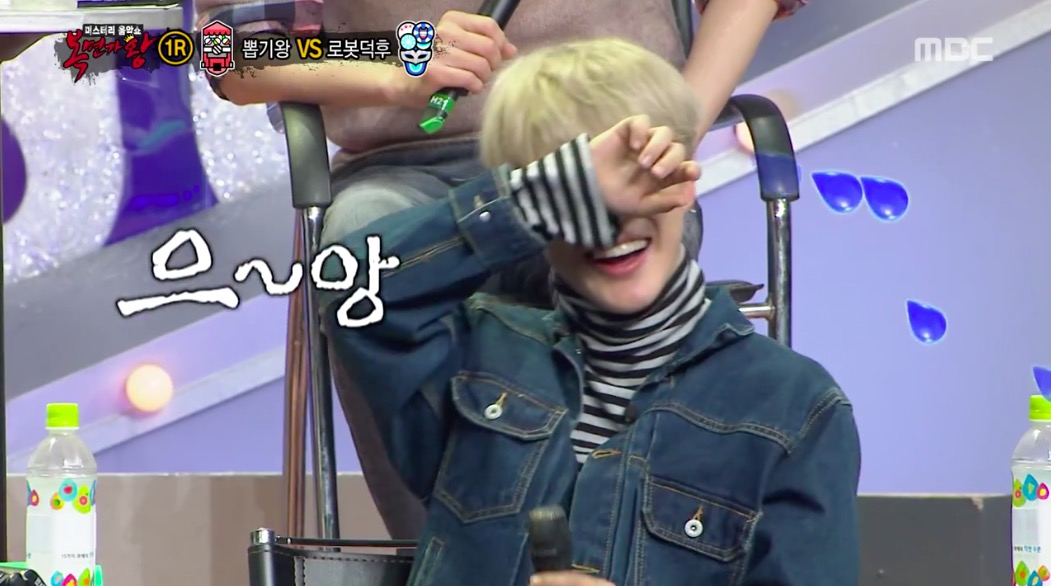 Kim Sung Joo teased Jimin by saying, “Jimin. You’re going to be very shocked.” Jimin looked even more nervous and made everyone laugh as he bent over and yelled, “Please make it not my senior! Please!” 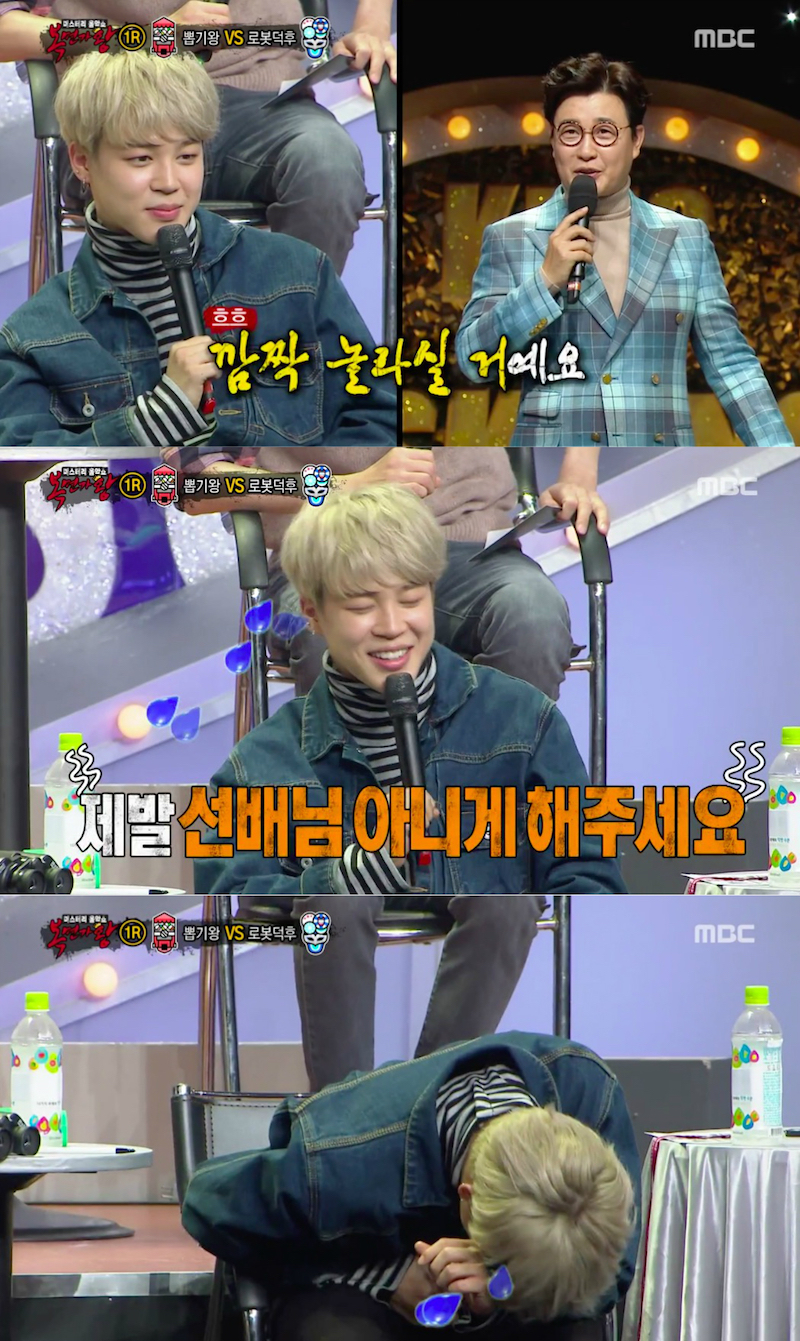 Robot Fanatic ended up being defeated in the vote count by King of Toy Machines, and so he had to reveal his identity. It turned out that he was former MBLAQ member Thunder, who debuted a few years before Jimin and recently released a solo mini album.

Jimin immediately crouched down when he saw it was Thunder, as his fellow panelists laughed. 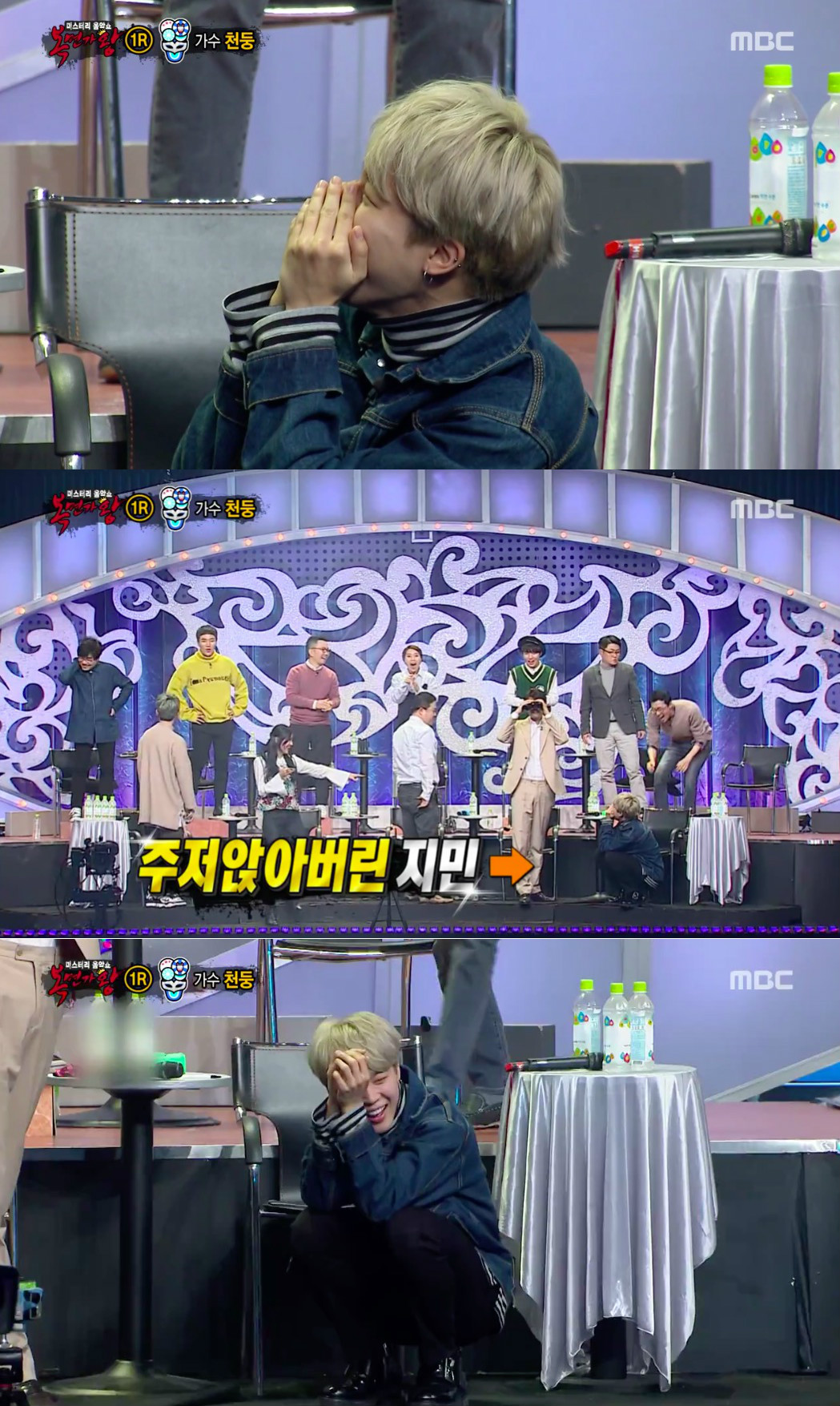 After Thunder’s performance, Kim Sung Joo teased Jimin for being the only one still standing, which Jimin replied to by making a heart with his arms. 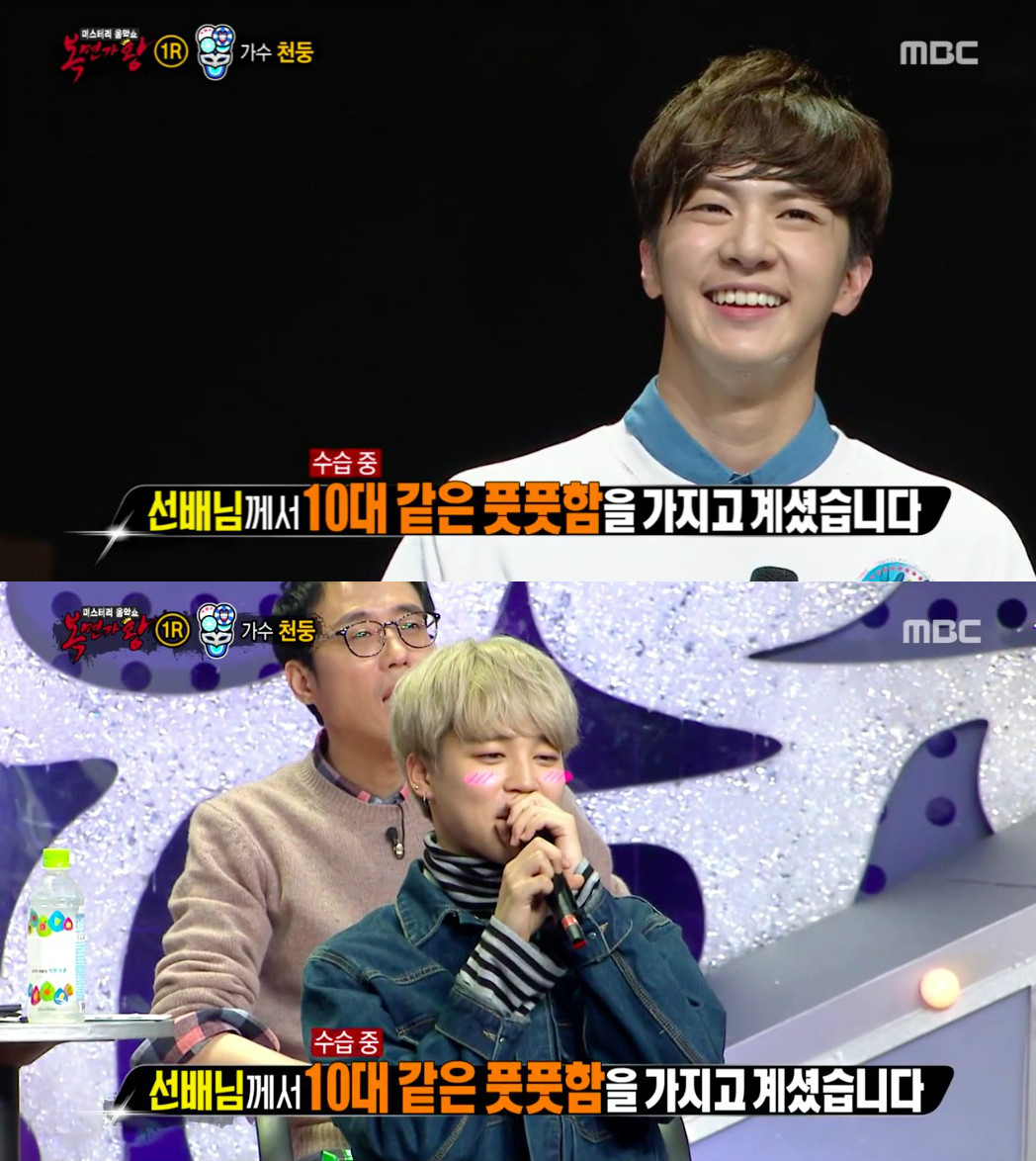 “He says it’s okay!” said Kim Sung Joo to Jimin, who gave Thunder a ninety-degree bow. “You can sit down now!” 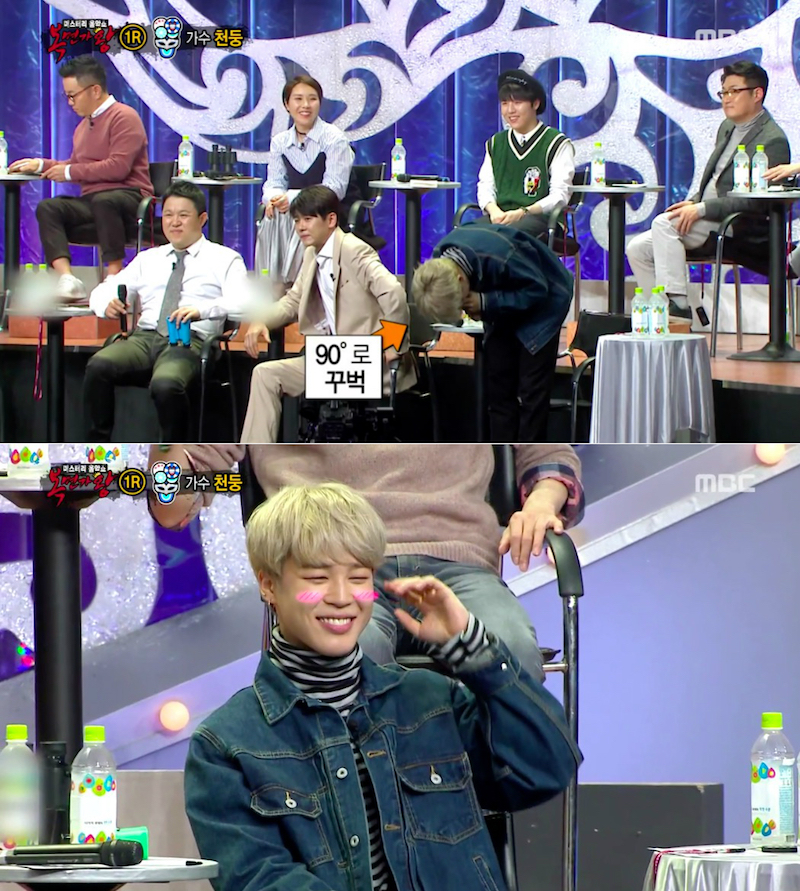 Watch the clip in the full episode of “King of Masked Singer” below!

SHINee
BTS
Kim Sung Joo
Taemin
Thunder
Jimin
The King of Mask Singer
How does this article make you feel?