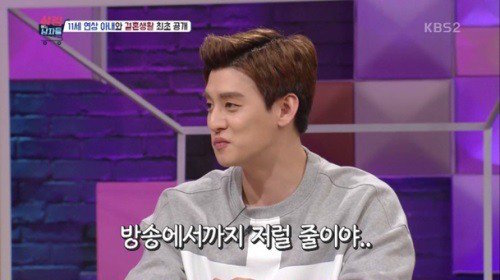 There’s no doubt that there are cons to revealing your relationship as a celebrity, but there are some definite perks as well!

On the January 10 broadcast of KBS2’s “Men Who Do Housework,” U-KISS’s Eli revealed how the rest of the group reacts to his public displays of affection.

“The members knew that I kiss my wife a lot in general, but they didn’t expect that I would show so much affection on broadcast,” he commented. “They say they’re jealous that I get to do so in public.”

Amusingly, the rest of the panelists chimed in and joked, “Doesn’t that imply that there’s at least one member who wants to reveal his relationship?” Eli hilariously became flustered at the unexpected reaction, and denied the possibility while laughing it off.

Meanwhile, the idol continued to show glimpses of his life as a father and husband during this episode.