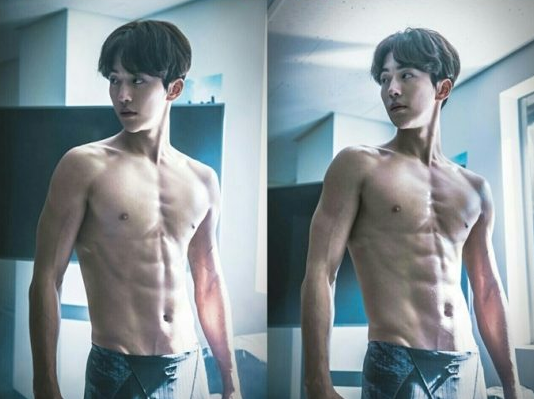 Actor Nam Joo Hyuk sat down for an interview after finishing his recent drama, “Weightlifting Fairy Kim Bok Joo,” and talked about how this drama made him grow as an actor.

After debuting as a model in 2014, Nam Joo Hyuk has worked non-stop, acting in “Surplus Princess,” “Who Are You-School 2015,” “Cheese in the Trap,” “Glamorous Temptation,” and now “Weightlifting Fairy Kim Bok Joo.”

Although this drama only ranked four to five percent in viewership ratings, the drama received good reviews due to the well-written storyline. About this, Nam Joo Hyuk said, “I would be lying if I said the ratings didn’t disappoint me. But we had fun making this drama and didn’t focus on the ratings. It doesn’t bother me much because we had a meaningful time creating this drama together. My close friend Ji Soo even told me, ‘Don’t focus on the viewership ratings and just do as you are, since you’re doing a good job.'”

He also addressed feeling pressure as the main character, saying, “At first there was a lot of pressure. The fact that I had to lead the drama and that I had to satisfy the many people watching with my lack of acting skills really overwhelmed me. But the feedback after it aired was positive so although I was tired physically, I was able to film happily till the end. The director helped me a lot. He took good care of me until the last episode. He helped me make many fun scenes. I was able to improve with the help of the director, too.”

The final episode aired on January 11. Nam Joo Hyuk relayed his final goodbye, saying, “I feel like the audience will sense that innocent vibe till the end [of the drama.] On one end, I’m sad that the drama has already ended. I still feel like I can show off a better chemistry, but I hope [the audience] likes what we’ve prepared. I believe that the ending will satisfy not only me but everyone who watches.”

Nam Joo Hyuk also played a swimmer in “Who Are You-School 2015” but he was able to showcase a different kind of charm in “Weightlifting Fairy Kim Bok Joo.”

The actor explained how he was able to achieve that, saying, “When I first got the offer, some people were saying that the character Han Yi An [in “School 2015″] had graduated high school and was going off to college. I wanted to make a different character than Han Yi An so I asked around a lot about personalities.”

Since his character is a swimmer, the swimming scenes must’ve taken a toll on him. He said, “Since the pool was so big, the water wouldn’t become warm no matter how much we heated it. And since the swimming scenes are long, my body would get colder as we film. I did get a cold during the last few days of filming, so it was quite hard. I think any drama that requires exercise is difficult. It was so hard that if other actors were to take my spot, they would have a hard time, too. I naturally started losing weight. My body’s the type to lose weight if I don’t exercise on a regular basis. Since I didn’t have time to eat while filming and swam, too, my weight began to decrease. I think it’s because I value sleep over food. I was 76 kilograms when I filmed ‘Three Days A Meal,’ but I think I’ve lost five kilograms now.”

Lastly, Nam Joo Hyuk thanked the fans for letting him receive the end-of-the-year rookie actor award, saying, “I felt pressure. I felt like I needed to do better because of it. But thank you for such a good award.”

If you haven’t watched the drama yet, you can start below!