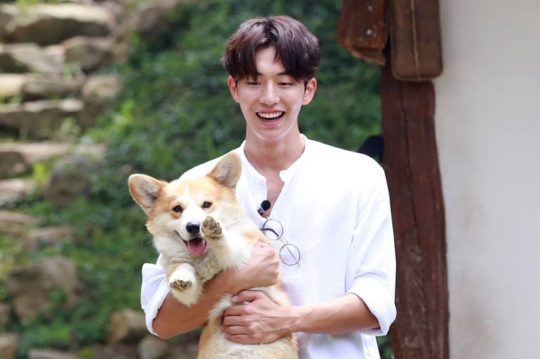 Surprisingly, Nam Joo Hyuk gets butterflies in his stomach when he stars in variety shows.

He disclosed, “I’m not the type to go looking for variety shows to appear on. Honestly I was a bit afraid of them in the beginning because I felt pressured to make people laugh. It’s really hard for me.”

Ironically, he first became popular through the variety show “Off to School,” in which he showed great bromance chemistry with Kangnam. He gathered more popularity by appearing consecutively in dramas “Who Are You: School 2015,” “Glamorous Temptation,” “Cheese in the Trap,” and “Scarlet Heart: Goryeo.” Recently, he starred in tvN’s “Three Meals a Day” and gained a cute image for himself.

He showed his loyalty to “Three Meals a Day” despite his trouble with variety shows. He said, “I’m willing to appear on ‘Three Meals a Day’ anytime. The show itself is great, but what made it even better was that I had the opportunity to talk to my seniors (Cha Seung Won and Yoo Hae Jin). If it weren’t for the show, it would have been hard to have a meal with seniors like them.”

He also claimed, “Because it’s a real variety show, you can move around freely with the camera on, and the day goes by really quickly when you cook and wash dishes.”

“Many of my fans say I’m cute, and I have the image of a ‘good son.’ I think the only way to show people that I’m more versatile is through my acting. There are many genres and roles I want to try out: for example, the role of a rebellious, bad guy, and also the role of a really devoted son who cares deeply about his family,” he expressed.

You can start watching the first episode below!

Nam Joo Hyuk
Three Meals a Day
How does this article make you feel?