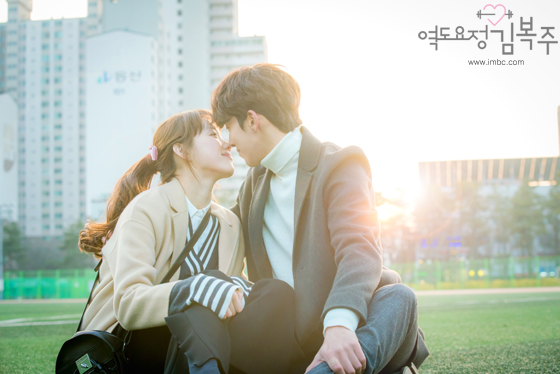 “Weightlifting Fairy Kim Bok Joo” healed the hearts of its viewers as it followed the dreams, aspirations, and love of youths. But it wasn’t just the viewers the drama comforted. Actress Lee Sung Kyung, who was the main female lead of the drama, gained a lot of positive energy during the filming process.

The actress stated, “I couldn’t watch the last episode because I was crying. Watching the drama when it aired, I sobbed because I was so sad it was ending. When we were nearing the end of filming the last episode, the director kept saying things like, ‘We have two cuts left,’ and ‘This is going to be our last scene,’ and that made me cry again.”

She smiled as she added, “I’ve cried twice working on a drama, and it was this one and ‘It’s Okay, That’s Love.’ Both were dramas meant to be healing for viewers. Usually, I’m pretty calm and able to keep the tears in, but I cried so much at yesterday’s wrap-up session. When I woke up, my eyes looked like sausages. It looked like when Bok Joo had a pimple.”

It was the first leading role for the actress, and she made it look like the role had been tailor-made for her. The drama’s production value and acting were highly praised, so much so that viewership ratings stopped mattering. Lee Sung Kyung was showered with love and praise.

Stating that she had never received so much love before in her career, Lee Sung Kyung said, “I’ve never received this many articles supporting me in my life, and it made me wonder if something like this will ever happen again. In the beginning, I really wanted to be praised and have a nice article written about me, and having that become a reality makes me tear up. Viewership ratings aren’t important to me. I’m so grateful and so lucky.”

What has been your favorite moment from Lee Sung Kyung’s performance in “Weightlifting Fairy Kim Bok Joo”?