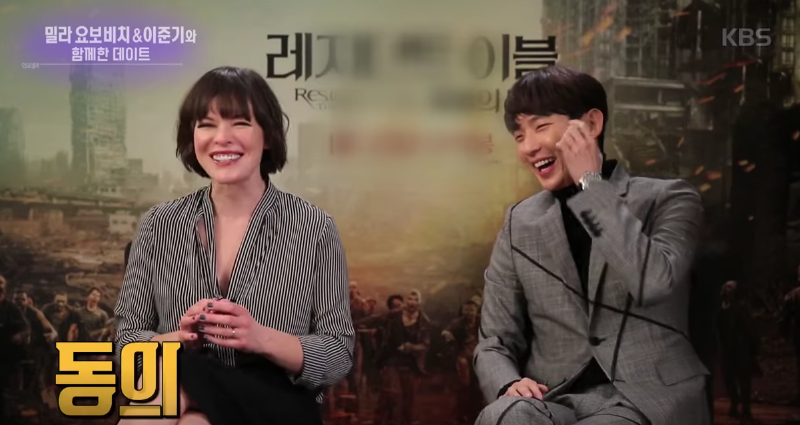 The two appeared on the January 14 episode of KBS’s “Entertainment Weekly,” where the actress gushed about her stay in South Korea thus far.

“I am so glad I’ve come to Korea!” the actress expressed, adding that her daughter had been learning Taekwondo since she was three-years-old and is currently a blue belt in the sport.

She even surprised viewers with a little Korean, describing Lee Joon Gi as “jjeoreo,” a slang term meaning ‘dope’ or ‘really awesome.’

In the sixth installment of the “Resident Evil” film series, Lee Joon Gi plays the role of Lee, the commander of the evil Umbrella Corporation.

“Lee Joon Gi is a scene stealer. In ‘Final Chapter,’ he’s an incredible villain. When I saw his performance, I couldn’t believe it,” she commented. The actress then went on to compliment his ability to shoot his own stunts, citing that usually Hollywood actors use doubles.

“Frankly, I’m a little embarrassed for myself,” she humbly teased before confessing that she had actually seen Lee Joon Gi in his 2005 film “The King And The Clown” as well.

“Resident Evil: The Final Chapter” will be released in South Korean theaters on January 25.