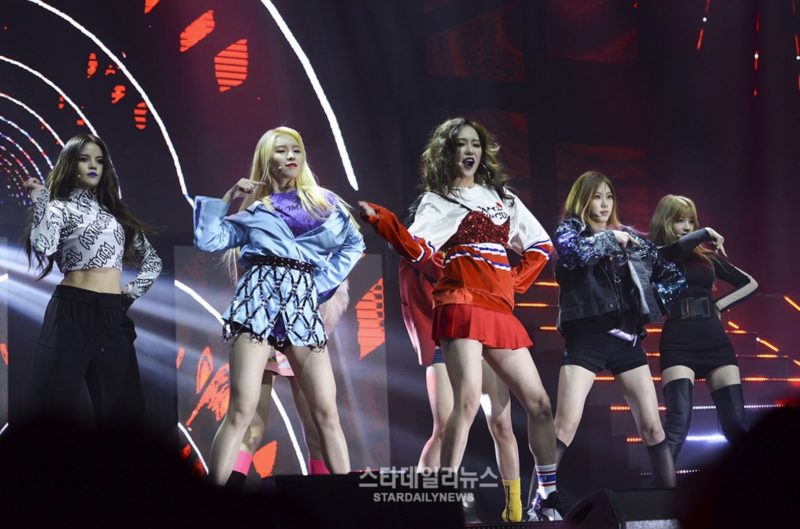 CLC recently concluded their album showcase for “CRYSTYLE” on January 17, at the Yes24 Live Hall in Gwangjin District, Seoul.

The girls have been turning heads with the fierce new image of their comeback, as well as their title song “Hobgoblin,” written by their label senior HyunA. During the showcase, CLC revealed how much HyunA had helped them for this comeback, saying, “Senior HyunA wrote the lyrics [to ‘Hobgoblin’] for us. She even did the directing for our hair, makeup, gestures, and expressions.”

Eunbin then made a cute promise to HyunA when she said, “Because we were so thankful, we did a search on what she likes to eat. We’ll empty our purses to buy her jajangmyun (black bean paste noodles).”

CLC also talked about how they had prepared for the “girl crush” concept, a full turn from their previous cute and refreshing image. Other than HyunA, they studied videos of other female artists who’ve done the concept before, such as Uhm Jung Hwa and Lee Hyori.

It was also revealed that Sorn had played a very active role in preparing for this comeback, to the extent of creating a Powerpoint that compiled the discussion points about the concept.

Talking about her role in the comeback, she said, “I have more parts this time, and there are even times where I will dance in the center. I’ve also taken singing lessons diligently, so my ambition has risen. I hope to show more of myself this time. It’s a thought where, even if I am a foreigner, I can still do it.”

CLC’s first comeback stage will be on the January 18 episode of MBC’s “Show Champion.”

Are you enjoying CLC’s new concept?