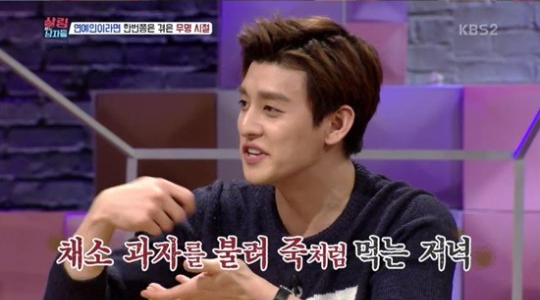 During January 10’s episode of KBS2’s “Men Who Do Housework,” U-KISS’s Eli talked about an unfortunate event that happened before he became an idol.

During the show, the panel talked about their struggles before finding success in the world of showbusiness. Eli revealed the road to becoming an idol wasn’t too difficult, and that he only trained for six months before debuting in U-KISS. However, his first venture into the entertainment industry was filled with hardships.

“Originally, I wanted to become an action star,” Eli said. “I fell for a scam in China. For breakfast, I ate instant ramen noodles. After finishing the noodles, I would add vegetable crackers worth 10 won (approximately $0.009) into the leftover soup to let them soak it up. I ate like this for three months.”

After sharing a moment from his past, the U-KISS member also talked about his current financial situation. “I haven’t been offered much work since revealing my relationship with my wife. I went into debt, and I’m still paying it off. We’re living in a monthly rental home right now,” Eli confessed.

He concluded by optimistically saying, “My wife and I will find a way to persevere, and we will grow stronger from it.”