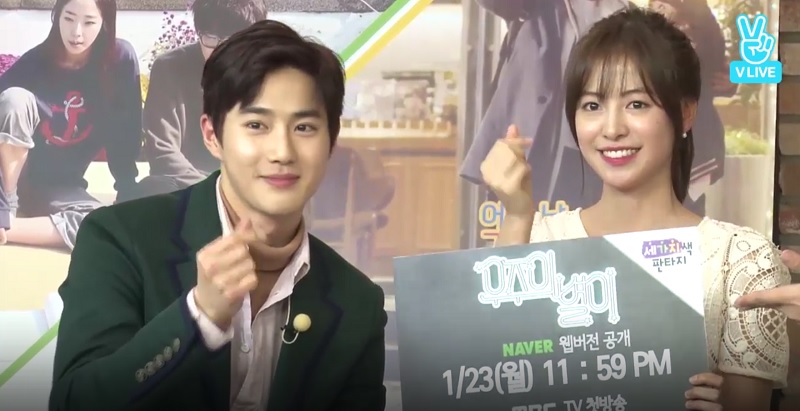 EXO’s Suho just made it impossible for his fans to not watch his upcoming drama.

“Three Color Fantasy” is a miniseries by MBC that consists of three mini dramas. The first mini storyline is “The Universe’s Star” (tentative title) by Suho and Ji Woo, the second is “Romance Full of Life” (literal title) by Yoon Shi Yoon and Jo Soo Hyang, while the third is “Queen of the Rings” (literal title) by Ahn Hyo Seop and Kim Seul Gi.

During the segment where the actors were talking about the heart-fluttering points of their storylines, Kim Seul Gi asked if there would be any skin in “The Universe’s Star,” to which Ji Woo replied, “You can look forward to it!”

Suho shyly explained, “It’s just a little… I’ll be showing my back a little.” He then sent viewers’ hearts fluttering when he did a wink and a finger heart, at Kim Seul Gi’s request.

Finally, Suho also made a sweet ratings promise to viewers, saying, “If the ratings go above 10 percent, I’ll randomly pick some viewers and treat them to coffee.”

“Three Color Fantasy” will begin airing on January 26 on MBC, but the web version will be released earlier through Naver on January 23, 11:59 p.m. KST.