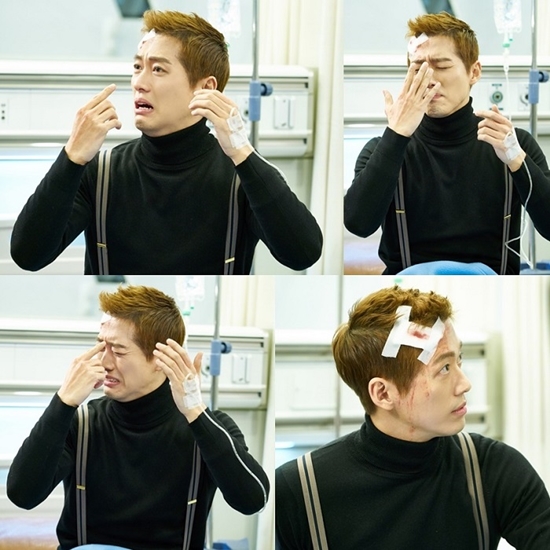 In the stills, Namgoong Min is sitting in a hospital bed with a head wound that’s bleeding through the bandage, and an IV drip inserted into his hand. It looks like a pretty severe wound, from the expression of pain on the actor’s face.

About a couple of weeks ago, Namgoong Min had uploaded a shot of this exact scene on his Instagram account, but without much of an explanation. This time, it was revealed that Kim Sung Ryong (the character played by Namgoong Min) had met with an accident, which is why he had to be sent to the hospital.

The scene was filmed on January 4 in Paju City, Gyeonggi Province. Thanks to Namgoong Min’s spectacular expressions and command of the script, the scene wrapped up flawlessly.

It must also have been uncomfortable to film with the bloody wound, bandage, and IV drip, but Namgoong Min paid them no heed as he settled himself on the scene early and began to assess the camera angles and flow. He also showed his professionalism as an actor when he checked the script again despite having memorized it ahead of time, and even had the scene planned out beforehand.

A source from the drama’s production company Logos Film said, “Namgoong Min always meticulously does his best with the script, even the insignificant scenes, so much that his special affection for the character of Chief Kim can be felt. His full immersion into the character will present an overwhelming performance right from the very first episode, so please look forward to the drama.”