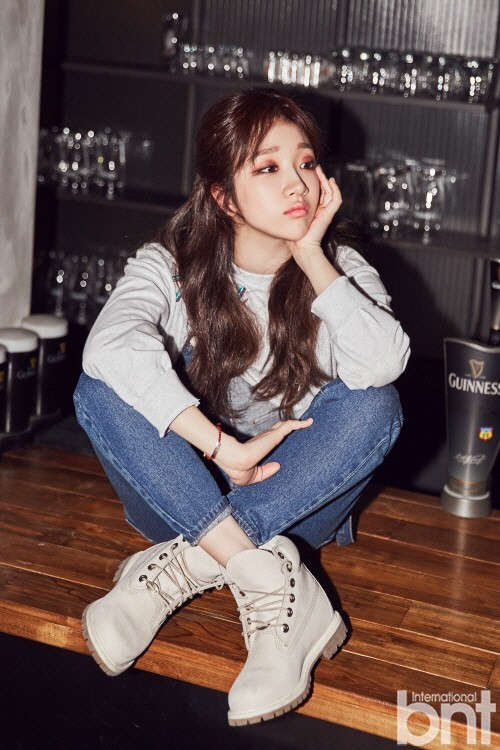 Recently rapper Euna Kim shot a pictorial with bnt magazine and talked about the disbandment of her former girl group, The Ark, and her experience on “Unpretty Rapstar 3” last year.

About her current activities, Euna Kim said that she has been working on practicing and producing new music ever since the show ended. She has also quit her part-time job at the restaurant where she was working while appearing on “Unpretty Rapstar.”

Euna Kim debuted in the girl group The Ark in 2015 but the group disbanded quickly after their first single, “Light.” “We didn’t have any control,” she said in the interview. “There was a problem with the company, and the result of our debut wasn’t very good either. Then the main vocalist had to leave the group because of vocal cord nodules and after looking for another vocalist, we ended up disbanding.”

Euna Kim also revealed that she lied to her parents after the disbandment because she couldn’t bring herself to tell them. “Each of us [in The Ark] did the best that we could at the moment,” she said, and shared that she is still cheering on former member Jeon Min Joo on “K-Pop Star 6.”

About “Unpretty Rapstar 3,” she said, “I thought that it would be an opportunity for be to become a singer but I wasn’t used to such a cutthroat environment and thought about [whether to appear] for a long time. But I decided in favor of it after thinking I can’t be afraid for the rest of my life.”

She shared that she would stay up all night working on the missions because she had joined the show without feeling adequately prepared. Though it was difficult, she picked the first mission with Grace, Janey, and Kassy as her favorite.

Of all the former contestants, she remains close with Yook Jidam. “After the cypher mission, she approached me first and we talked and we had a lot in common. She’s younger, but feels like someone older. And not too long ago, I met up at a club with some of the older girls from the show.”

In 2017, Euna Kim plans to find her own color by trying different kinds of music. She picked Yoon Mirae as her role model because she is recognized for both her vocals and her rap. “I want to be a singer that the public can like and relate to,” she said. “I want to make relatable music like Heize and be recognized as a rapper and a vocalist.”

The Ark
Unpretty Rapstar 3
Euna Kim
How does this article make you feel?