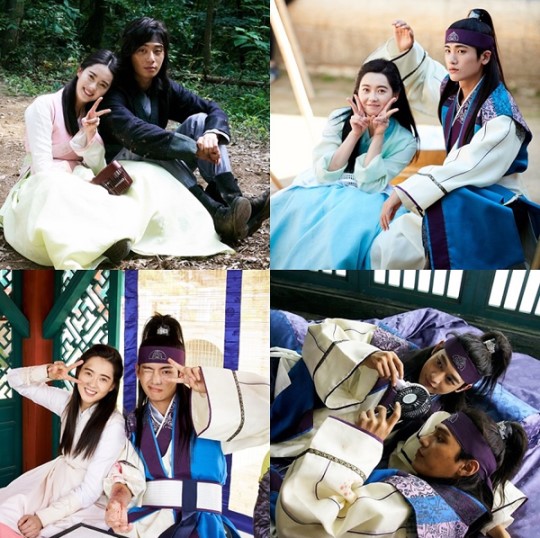 As “Hwarang” enters its middle half, the drama’s production team has released behind-the-scenes photos from up till episode 10.

In the photos, leading lady Go Ara shows her lively and refreshing charm as she shows her great chemistry with Park Seo Joon, Park Hyung Sik, and even the sunny Kim Taehyung (BTS’s V). Whether she’s joking around with her peers or flashing a peace sign at the camera, Go Ara is the “vitamin” on set.

The set of photos also shows SHINee’s Minho and Do Ji Han lying side by side while holding up small electric fans to their face and smiling at the (other) camera. In other photos (yet to be released), Kim Taehyung is smiling brightly as Minho and Jo Yoon Woo look at him with pleased smiles.

A source revealed, “The teamwork of the “Hwarang” [cast] was strong and amicable beyond expectation. With actors all around the same age, the smiles and laughter never stopped. The closeness between the actors made the rapport in the drama possible. Their strong teamwork will shine out even more in future. Please look forward to it.”

“Hwarang” airs every Monday and Tuesday, catch up on the drama below!