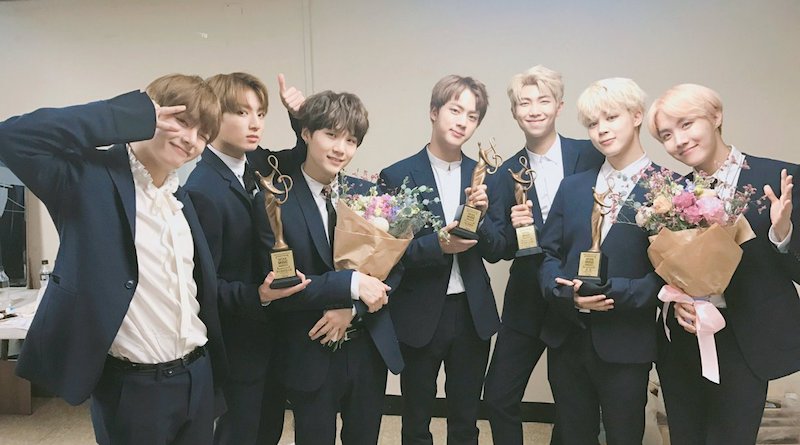 BTS Describes Their Goals For 2017, Including Mixtapes, Variety Shows, Gaining Height, And More

With the release of their next album coming up soon, BTS recently sat down for an interview about their plans for the coming year!

After their hugely successful 2016, the news outlet Sports Seoul asked each member of BTS to share their thoughts about the past year, as well as their 2017 resolutions for both the group and themselves individually.

Leader Rap Monster said, “2016 was literally ‘the most beautiful moment in our lives.’ It was a year that has enabled us to do the things we want in the future, and upgraded us to a higher level.” He stated that he hopes they will be able to raise their voice louder this year so that they can have a positive effect on those who watch over them and like them.

“Personally, I plan to release a lot of music this year,” Rap Monster added.

Suga described 2016 as a meaningful year for him, and said their upcoming “WINGS” concert tour will take them to another level. “I hope 2017 will be a year that shines as bright as last year,” he said. “Last year, I did my own individual activities like putting out my mixtape, but this year I plan to focus on supporting the other members as they make their own music.”

“2016 was a year when we achieved goals that we’ve been wanting to achieve,” said J-Hope. “Musically, I took part in our second full album’s intro, and took on new challenges in various areas such as in our videos. In terms of our group, we achieved our goal of winning a grand prize. It was a year that has made me more confident.”

J-Hope explained that their success in 2016 has also made him aspire for even more. “I want to focus on studying foreign languages to communicate with foreign fans, since our ‘WINGS’ tour is coming up,” he said. “Health is also important. Rap Monster and Suga have put out mixtapes, and I think I need to get my own ready too.”

Jimin described 2016 as a year full of happiness, and expressed his hopes that 2017 will be full of happy things too. “I hope that not only us, but also our fans will be happy,” he said.

“My goal is to show a more mature and a bit cooler side every year,” Jimin added. “Personally, I hope that I can eat a lot and get just a bit taller.” Rap Monster mentioned that 2016 was a year in which Jimin was “rediscovered,” saying that he did an excellent job at performing the role of “center” in their performances of “Fire” and “Blood, Sweat & Tears.”

V said, “In 2016, both our group’s goal and my own personal goal was to win a grand prize at an award show, but we luckily received a lot of love from fans and achieved that goal. For singers, a grand prize is both our greatest goal and our dream, so I’m so proud and grateful to our fans since that has come true.” V added that in 2017, he’d like to perform in a way that will fit their title as artists that have won grand prizes.

“Personally, I acted as Hansung in the drama ‘Hwarang,’ but I think I’m not yet deserving of the title ‘actor-idol,'” V stated. He went on to say that he wants to work on his acting, receive good reviews, and reach a peak around 2021, at which time he’d like to be trying to take on the challenge of winning awards for acting as well.

Lastly, youngest member Jungkook described 2016 as a year in which many K-Pop fans learned about their group, and said he hopes all the members will maximize their individual strengths in the coming year. “Personally, I want to write a song,” he said. “So far I’ve written melodies, but now I want to try making the beat too. By December 31, I will release a self-composed song in some form for sure.”

BTS’s new album “WINGS: You Never Walk Alone” will be released on February 13, with the guys beginning their “WINGS” concert series with two shows in Seoul on February 18 and 19. They will then be embarking on a world tour in March with dates announced for Chile, Brazil, and the United States.