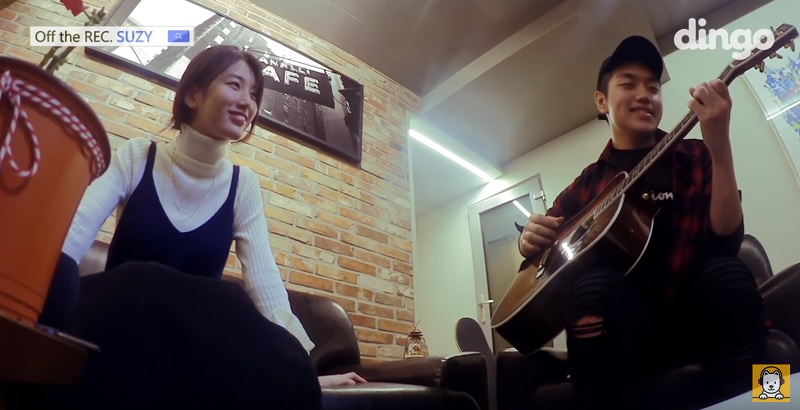 “Off the REC. Suzy” had a surprise guest on its fourth episode– Sam Kim.

In the second segment of the episode, while sitting in the car, miss A’s Suzy told viewers that she was on her way to meet a special person, with whom she would sing with. She said, “I’m going to try singing with a feeling that’s different from usual. I’m nervous about it too.”

The special guest turned out to be Sam Kim, who became adorably shy the moment he saw Suzy. He shyly told her that he is her fan, to which she replied, “Me too.” Sam Kim then revealed that the day before, he had received a request from his agency Antenna Music, asking if he could arrange a song on the spot the next day. But he got a shock when he found out that it would be for Suzy.

Despite his nervousness and the fact that he had started on the arrangement just moments before she arrived, Sam Kim was all confidence when he began strumming the groovy accompaniment to Suzy’s “Yes No Maybe.” With Sam Kim’s guitar and Suzy’s vocals, the dance track was turned into a starkly different acoustic version that had its own unique charm, leading Suzy to joke that it was even better than the original.

The two also covered Sam Kim and Kwon Jin Ah’s duet “For Now,” where they matched so well that after the song, Sam Kim said, “It would be great if we could collaborate in future,” and Suzy eagerly agreed.

Suzy
Sam Kim
Off the REC. Suzy
How does this article make you feel?