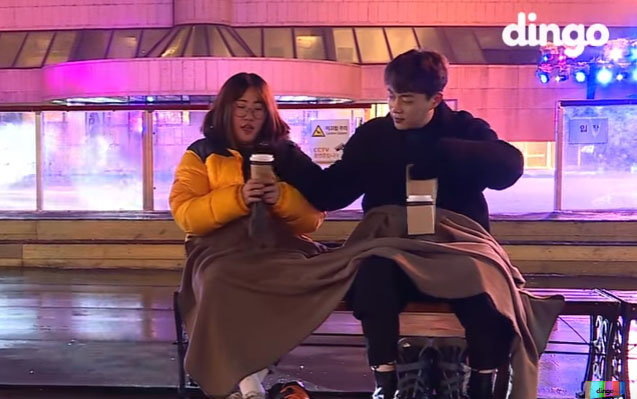 BEAST’s Doojoon really knows how to spoil his fans!

On January 27, the singer appeared on another episode of a recurring Dingo series where idols pay a visit to fans during a shift at their part-time job to offer them encouragement and a helping hand.

In this episode, Doojoon stops by a Seoul ice skating rink at the end of the day to surprise Jisun, an employee currently up to her ears in piles of rented ice skates she still has to clean. Needless to say, when her favorite idol ends up popping in halfway through the task, she justifiably loses it. And then she freaks out about how bad her hair must look. (Wouldn’t we all?)

After Doojoon helps Jisun put away the rest of the skates, he asks her if it is possible for them to go ice skating together. Once they make it to the rink, he surprises her with a pair of warm gloves and helps to wrap her neck in the scarf he was just wearing.

Doojoon turns out to be an endearingly horrible skater, and Jisun confidently coaches him along in between big laughs as he repeatedly trips in front of her. Once he gets the hang of it, the two continue to circle around the rink hand in hand.

Later, the tired skaters keep warm underneath a blanket, sipping coffee and having a sincere heart-to-heart. When Doojoon asks her if anything has been troubling her lately, Jisun confesses that has self-esteem issues because of her weight. He responds by telling her that she has her own personality and charm, admitting that he used to be chubby himself. As a fan, of course, Jisun already knew this, and she immediately tells him that she saw his chubby pre-debut picture. He jokingly insists that the picture in question was not that bad.

After a bit more conversation, Doojoon ends the night by walking her back to her apartment. Despite snow falling hard around them, Jisun expresses disappointment that their evening is already over, and asks him sweetly if they can walk just a little slower to enjoy the moment. At the door, he surprises her with presents he picked out for her, a candle and reed diffuser he hopes she will find relaxing. And then, of course, if we were not jealous already, Doojoon gives Jisun a big parting hug.

Watch the adorable exchange between Doojoon and Jisun in the full video below!

BEAST
Yoon Doojoon
How does this article make you feel?