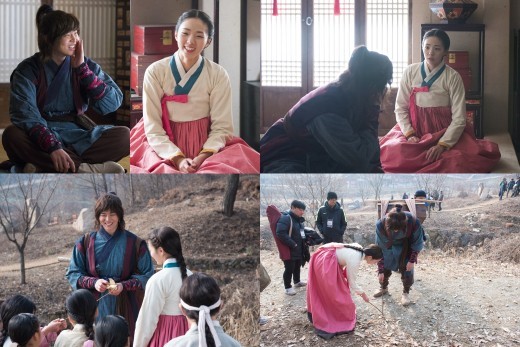 Directed by Kim Jin Man and Jin Chang Gyu and written by Hwang Jin Young, Yoon Kyung Sang’s titular character has no place in society due to his birth but wins the hearts of the people, while Chae Soo Bin’s character plays his lady love.

The 30-episode drama is Yoon Kyun Sang and Chae Soo Bin’s second project together, after starring in the music video for “Girlfriend” by Uniqnote in 2014. Reportedly the two actors made jokes on the set of the drama, raising the energy level all around, and exchanged hand warmers in the cold weather.

On January 20, the two actors filmed a scene in which Chae Soo Bin slaps Yoon Kyun Sang across the face, but the atmosphere on set remained full of smiles and laughter. Yoon Kyun Sang also took care of Chae Soo Bin when she had to film outside on a mountainside in her thin hanbok [traditional Korean clothing].

Their chemistry was apparent even at the press conference for “Rebel Hong Gil Dong,” with Chae Soo Bin describing her co-star as “someone who makes everyone around him feel comfortable” and Yoon Kyun Sang saying, “Thanks to the lovely Chae Soo Bin, I’m able to enjoy the filming.”

Yoon Kyun Sang
Chae Soo Bin
Rebel: Thief Who Stole the People
How does this article make you feel?