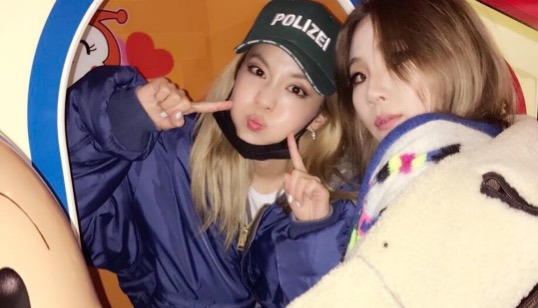 Sandara Park And CL Hit The Arcade Together In Fun Photos

Sandara Park and CL spent their Lunar New Year unwinding in the best way – hanging out at an arcade!

On January 28, Sandara Park uploaded a set of photos of their day to her personal Instagram account, where the two friends can be seen playing a variety of games and cheesing it up for the camera.

In her first post, the idol starts off by sending out a Lunar New Year greeting to all of her Instagram followers. The caption reads, “Let’s have a happy new year! A really happy one! Happy new year!” In the image, Sandara Park makes an adorable funny face at the camera while sitting next to CL, who looks at the camera over her shoulder.

A few hours later, she shared a picture of herself playing a candy prize arcade game with a hilarious amount of focus, captioning the post, “Candy was pouring out!”

In the final image, CL and Sandara Park are seen battling it out at the basketball hoops. The caption “Shoot! CL vs. DARA!” caused a frenzy among her followers, with many of her fans leaving comments asking her who won.

Meanwhile, the former 2NE1 members released their final single as a group on January 21. “Goodbye” topped iTunes charts in eight different countries. As of eight days after its release, the accompanying music video is currently at 8.8 million YouTube views.

Sandara Park
CL
How does this article make you feel?