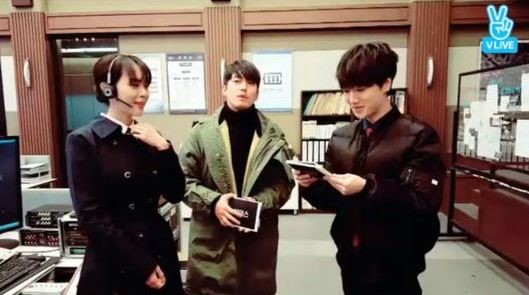 We might be able to see a return of rapper Jang Hyuk if his new drama continues to fare well in the ratings!

On January 29, the actors of the new OCN drama “Voice” held a broadcast on V Live and revealed what they will do if the drama hits 8 percent in the ratings.

Actor Jang Hyuk went first, saying, “If ‘Voice’ goes over 8 percent, I will rap over a walkie talkie!”

Lee Ha Na chimed in, “If we hit over 8 percent, I will sing a song,” and Yesung added that he will hold a special meeting with the viewers of the show.

Yesung also added, “I communicate with Jang Hyuk a lot through the walkie talkie and so I don’t get a chance to see him a lot on set. I want to be able to act alongside him and learn from him.”

Lee Ha Na gave her two cents on filming as well, saying, “I talked a lot with the director to learn how I can best act the role of a person who had lost their family. I told him to help me later on to get married as well.”

Check out the first episode of the drama on Viki here below!