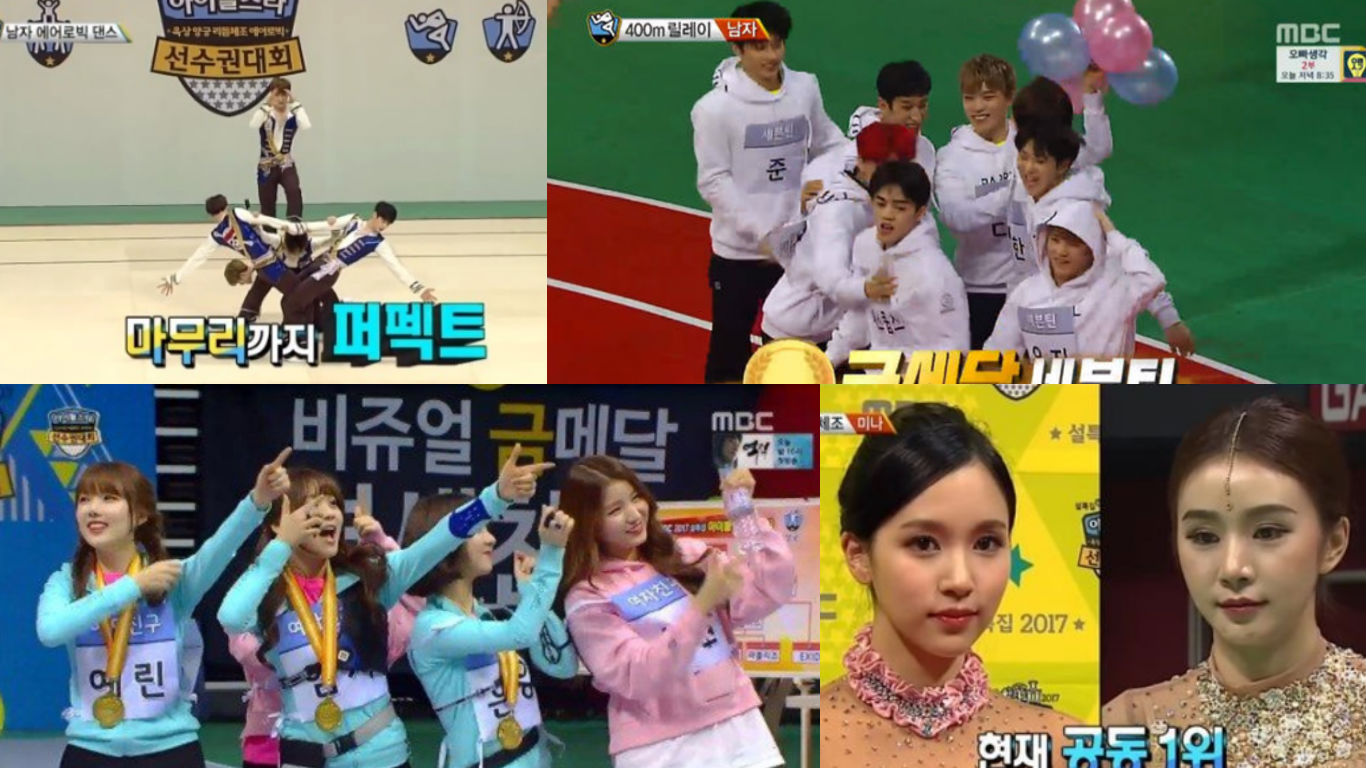 This year, MBC’s “2017 Idol Star Athletics Championships” was broadcast as a Lunar New Year special on January 30, with Lee Soo Geun, Apink’s Jung Eun Ji, and Jun Hyun Moo as the main MCs for the event. Approximately 200 idols joined this year’s broadcast to showcase their physical abilities and engage with their fans. 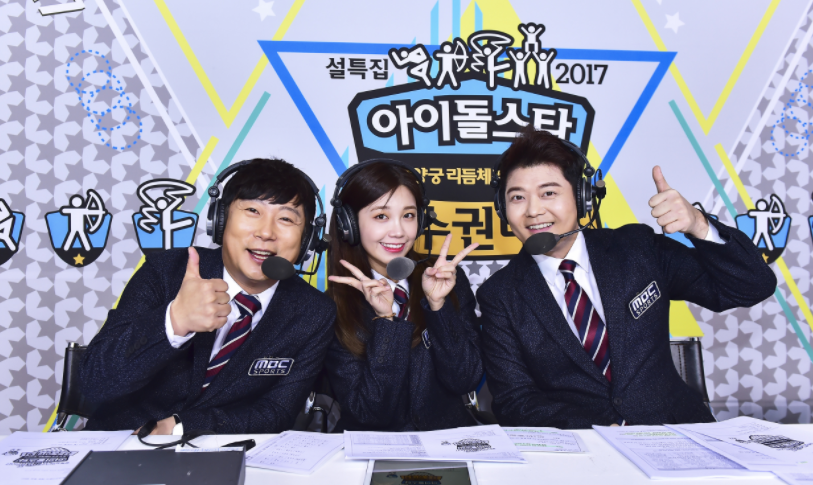 The event started off with all the idols singing the program’s official theme song “Hand-in-Hand.” Then GFRIEND’s Yerin, SEVENTEEN’s Dokyum, TWICE’s Dahyun, and B1A4’s Sandeul led everyone in doing light exercises (choreographed by SEVENTEEN) to loosen up their bodies. 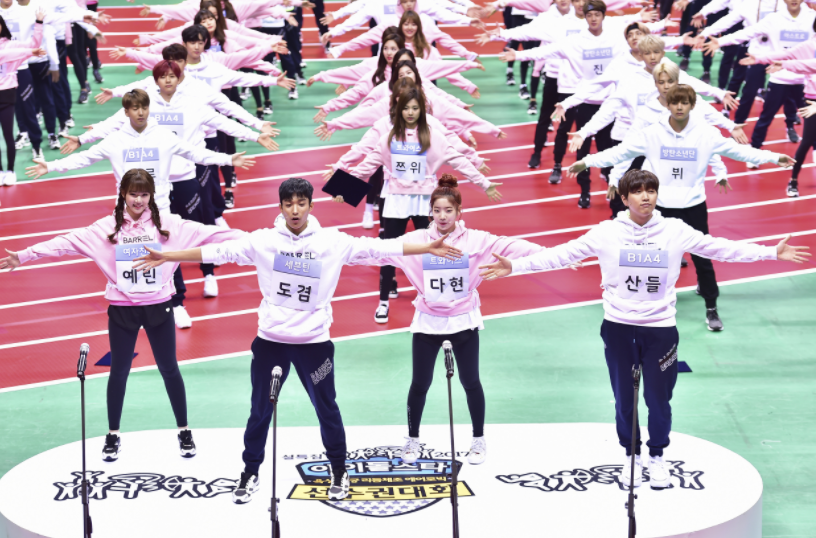 With GFRIEND’s Yuju being the main contender for the sprint, many predicted her to come in first. And just as expected, the GFRIEND member came in first as she leaped to the finish line. 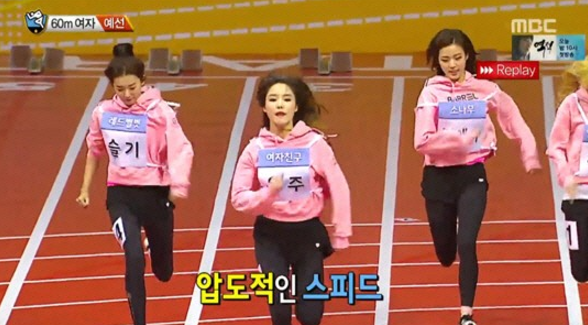 The MCs expected EXID’s Hani to be a strong contender for the third round, but in the end, gugudan’s Kim Sejeong came in first (as Apink’s Eun Ji predicted). 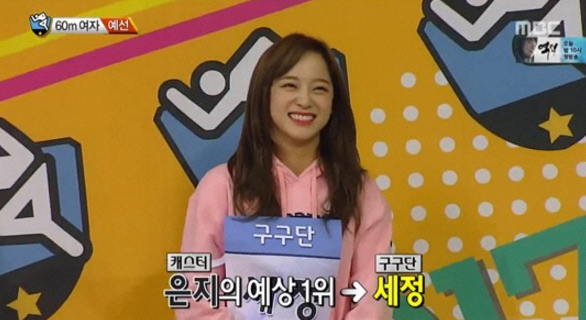 Cosmic Girl’s Eunseo was able to come in first place, leaping to the finish line.

In the fifth round, H.U.B’s Rui amazed everyone by speeding to first place, creating a new first place record. 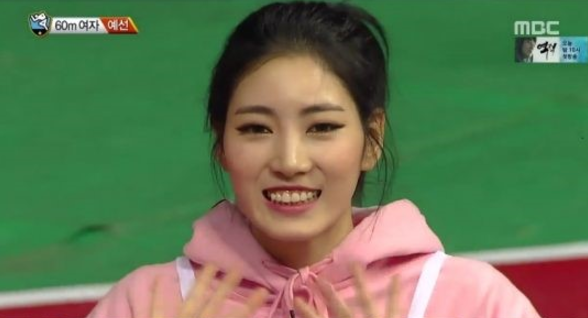 The MCs anticipated for either Rui or Yuju to win. In the end, H.U.B’s Rui sped ahead of the others to achieve first place.

Many predicted for NCT 127’s Yuta to be first, but in the end, ASTRO’s Moonbin ran as fast as he could to secure first place in the finish line.

For this round, real-life brothers MADTOWN’s Heojun and VICTON’s Chan raced against each other. And while Chan was close, MONSTA X’s Jooheon placed first. 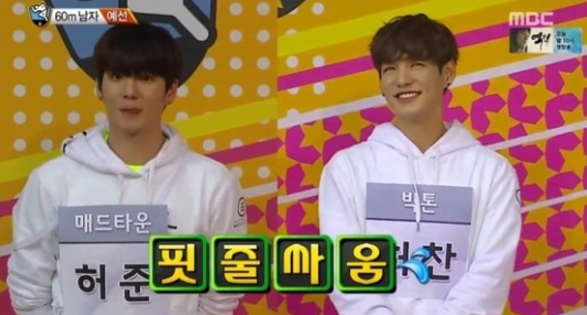 All six runners ran incredibly close to the finish line, but a closer look at the recorded footage revealed SNUPER’s Woosung as the gold medal winner. 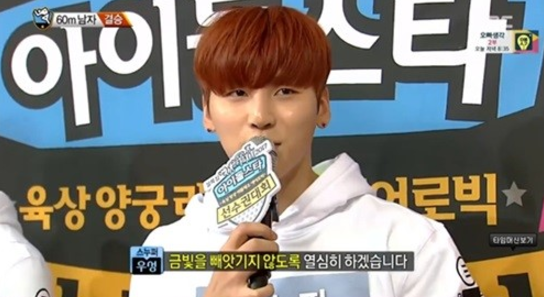 VIXX and B1A4 went head-to-head this round. With B1A4’s Gongchan and CNU showcasing their archery skills, B1A4 won in the end.

MONSTA X went against B1A4. And while each team highlighted their archery skills, B1A4 secured their win. 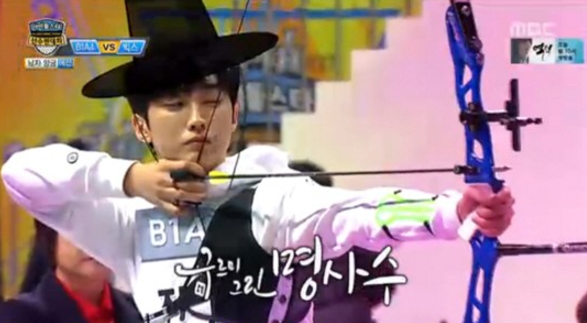 EXO went against SEVENTEEN in this round, but SEVENTEEN was able to secure their win. 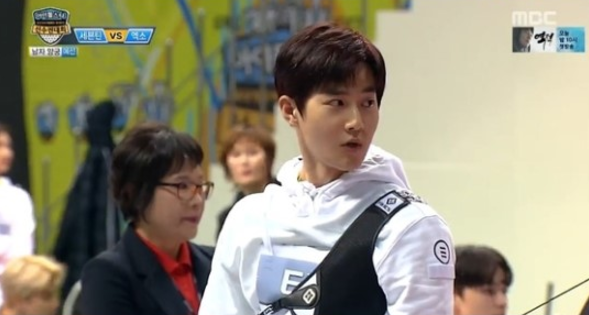 BTS went up against SEVENTEEN this round, but SEVENTEEN won in the end. 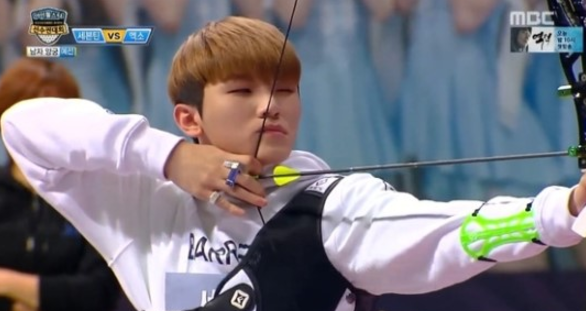 SEVENTEEN and B1A4 went head-to-head in scores, but B1A4’s CNU was able to achieve multiple high scores which resulted in a gold medal for B1A4. The group celebrated by handing out candy to their fans! 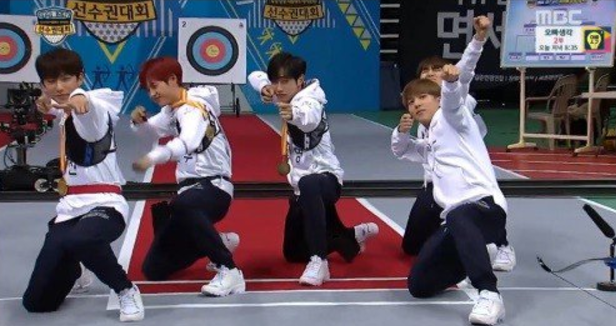 AOA went up against TWICE in the first round, but TWICE was able to win. 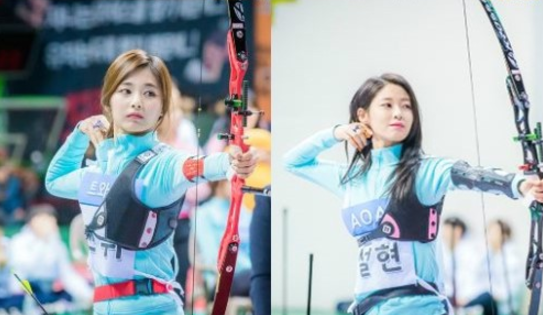 GFRIEND went up against TWICE, but with GFRIEND continuously getting top scores, they were able to secure their win.

In the end, EXID was able to beat out Lovelyz in the fourth round.

EXID went up against GFRIEND in the final round. As both teams made slight mistakes due to nervousness, the MCs were unable to anticipate the final winner until the very end. Finally, GFRIEND was able to secure their win! 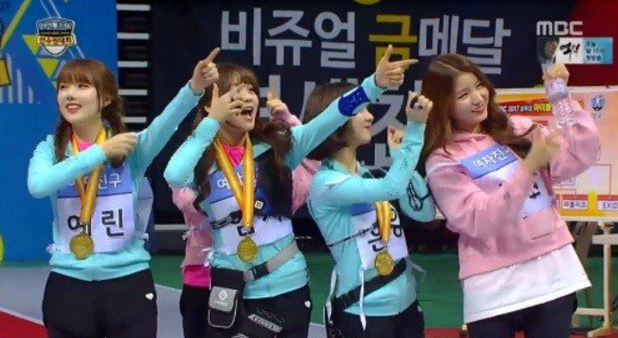 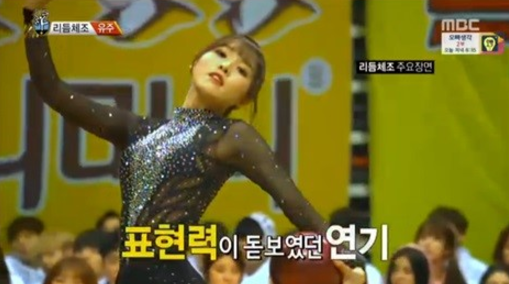 Yuju was able to demonstrate a solid performance with a ball, while Yein showcased her sexy “Bond girl” image with a ribbon. Cao Lu challenged herself by taking on the difficult Indian clubs for her performance, and was able to go through the performance without making any mistakes. 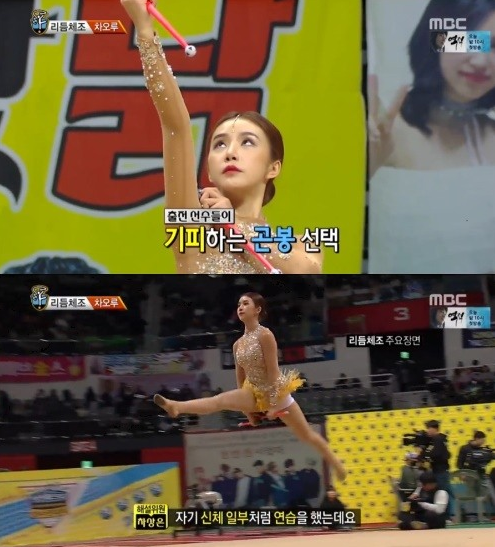 YooA was able to showcase her elegant ribbon skills despite making a small mistake. Mina decided to enjoy herself this year by using a ball for her performance, and was able to perform without any mistakes. 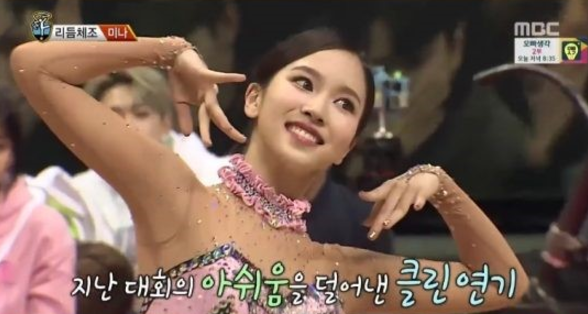 Finally, Cheng Xiao showcased her gymnastic abilities by using a hula hoop, but made a couple mistakes during her performance. 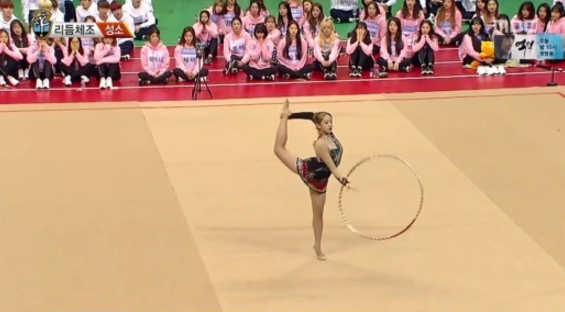 Final winners: In the end, TWICE’s Mina and FIESTAR’s Cao Lu tied for first place and both won a gold medal.

This was the first time for boy groups to participate in rhythmic aerobics! Six teams competed this year, with Teen Top, B.A.P, SEVENTEEN, ASTRO, KNK, and SNUPER! 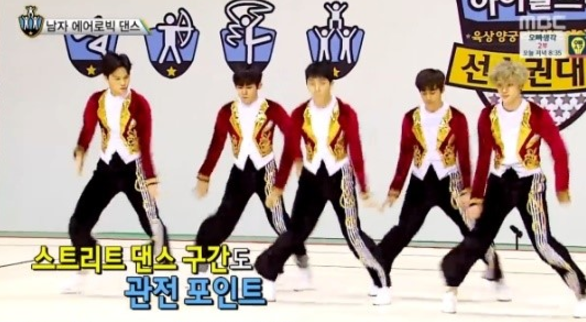 Teen Top began first with a classical concept, while ASTRO took on a “Pirates of the Caribbean” theme for their performance. ASTRO also choreographed their own street dance segment. 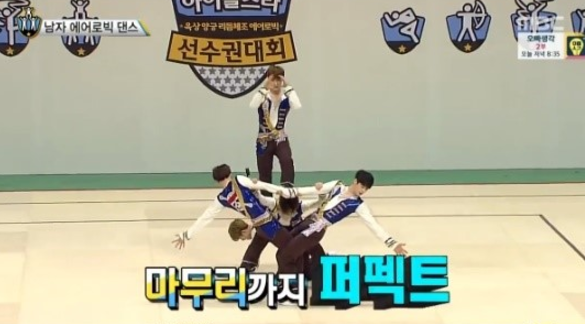 SNUPER channeled Michael Jackson for their performance and wore black and gold outfits to get into character. 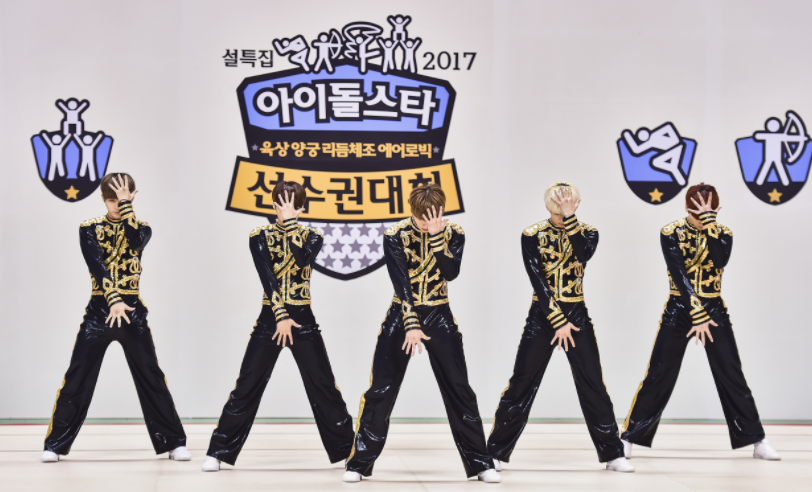 B.A.P took on a Kung-fu concept, showcasing their aerobic skills by doing kicks and flips while smiling during their performance. 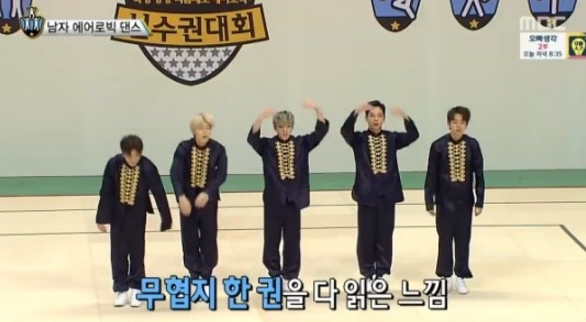 KNK channeled the Marvel superhero Iron Man for their performance, as they dressed up in bright red and gold outfits. Many were concerned that the KNK members would have a hard time doing aerobics due to their height, but they were still able to get a good score in the end. 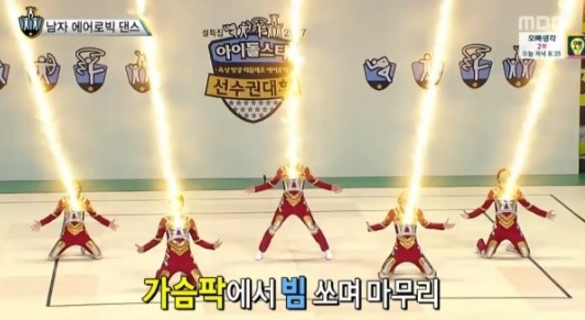 SEVENTEEN’s Dokyum, The8, Hoshi, Dino, and Jun took on a “Transformers” concept and dressed up in robot-like outfits. The members showcased their aerobic dance skills through their unique and difficult choreography. 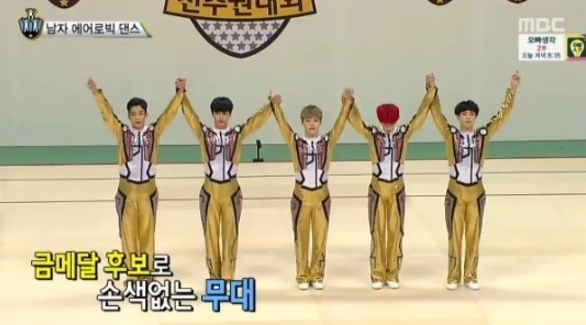 While SEVENTEEN and ASTRO both tied with the top score, there could only be one gold winner. In the end, the judges chose the highest practice score and ASTRO succeeded in gaining first place. The members then took selfies with their fans to celebrate their win!

EXID, GFRIEND, TWICE, and Oh My Girl went head-to-head in the 400-meter relay race. But in the end, Oh My Girl was able to showcase their running abilities by achieving first place. EXID was able to win silver, while GFRIEND earned a bronze medal. 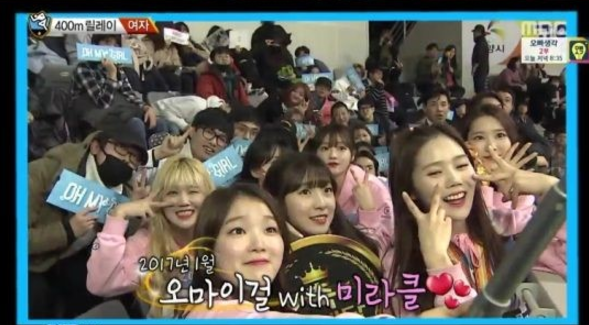 BTS gave it their all this year, with J-Hope successfully passing the baton to Rap Monster. But as SEVENTEEN’s S.Coups led ahead, VIXX’s Leo unexpectedly fell after following closely behind. In the end, SEVENTEEN was able to secure their gold medal win while BTS gained second place. 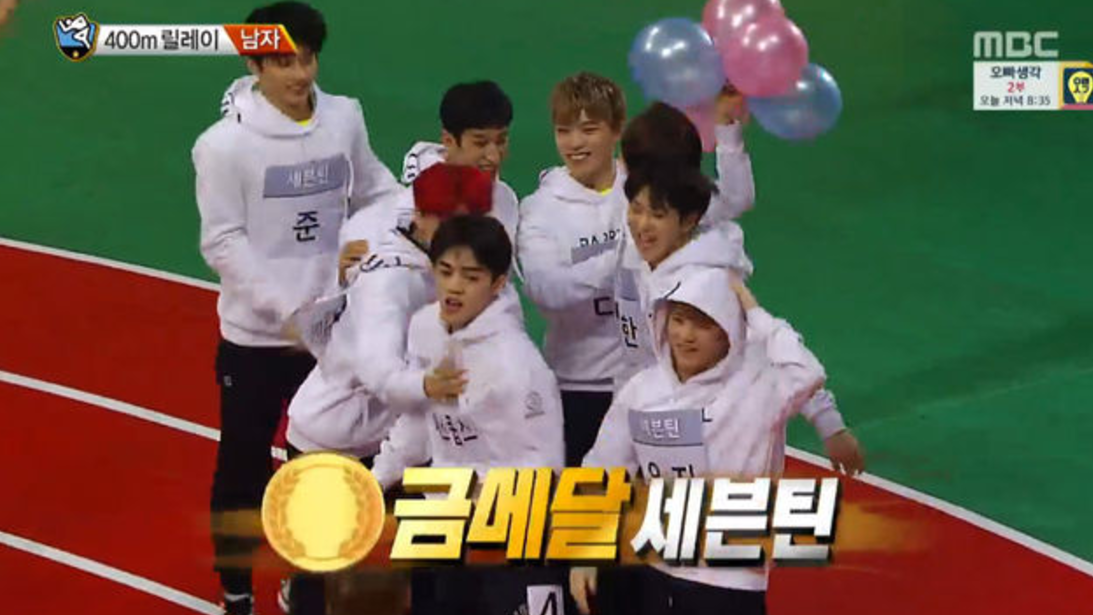 *A previous version of this article incorrectly stated that GOT7 was also participating in the games.