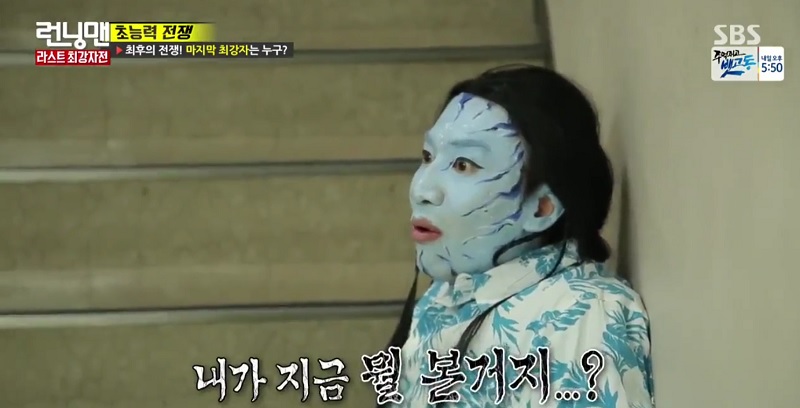 The January 29 episode of “Running Man” was an epic battle of superpowers between the members as they returned to their best characters, like Sherlock and Thor.

But the highlight of the episode was surprise guest Gary, who gave the members a shock when he suddenly appeared together with his “Lol-lol Clones.”

Their first victim was Lee Kwang Soo, who froze upon hearing Gary’s voice in the swarm of clones that pounced on him out of the blue. Kim Jong Kook, Haha, and Song Ji Hyo, who were a short distance away, were also thrown into a panic when they heard the commotion, but the panic turned to confusion when they too heard Gary.

In the interview, Gary said, “It was on short notice but thank you for inviting me. It’s been a while, but I won’t go soft on them.”

As Lee Kwang Soo regrouped with the rest after the scare he received from Gary, the members began discussing how shocked they had been to hear that he was back. The conversation then took a hilarious turn into complaining about how he’s suddenly back again after they had gotten over the sorrow of him leaving, as Haha said, “Wasn’t he stopping [for good?] What about our feelings?”

The news was also delivered to Yoo Jae Suk and Ji Suk Jin in the “prison” by Kim Jong Kook when he got eliminated as well. Both older members exclaimed in shock over the news, before Yoo Jae Suk started raging at Kim Jong Kook for wrongly eliminating him.

Despite his fierce attacks on the male members, Gary was all soft smiles when he met Song Ji Hyo, calling her name gently and even saying, “I can’t take Ji Hyo’s tag off!” The Monday couple then shook hands while saying how glad they were to see each other.

So glad to see Gary back with the team!