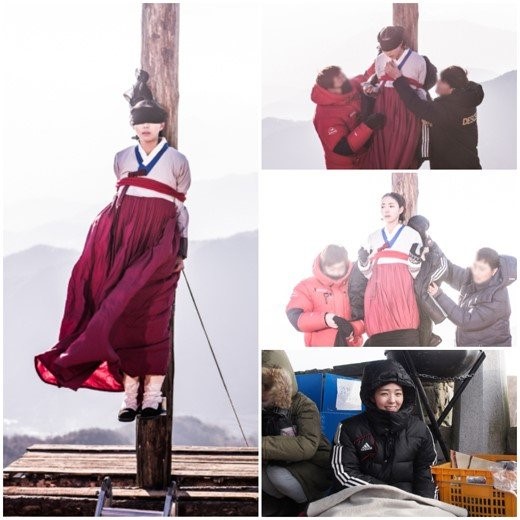 On January 30, MBC’s “Rebel: Thief Who Stole The People” released a set of behind-the-scenes cuts of actress Chae Soo Bin, who plays Song Ga Ryung in the drama.

In the cuts, Song Ga Ryung is tied to a pole while blindfolded, but although her life is at stake, she worries more for Hong Gil Dong (Yoon Kyun Sang) instead, causing him to feel anguish.

Song Ga Ryung is a character who lives in fear of being persecuted as a woman, but after meeting Hong Gil Dong, she learns how to enjoy life like a human being. But in a twist of fate, she comes face-to-face with tragedy, and has to take a gamble on her life to stand up to it.

Despite the cold spell, Chae Soo Bin immersed herself fully into the character of Song Ga Ryung, Hong Gil Dong’s one and only love.

“There were strong winds and the temperature went to as low as minus nine degrees Celsius (15.8 degrees Fahrenheit). Wind chill temperature was about minus 20 degrees Celsius (minus four degrees Fahrenheit). All the staff on-site were shivering from the cold,” said the production team. “On top of a thin hanbok, Chae Soo Bin’s head and hands were directly exposed to the cold, and her lips were so frozen she could hardly say her lines. She really suffered a lot.”

Chae Soo Bin also talked about filming for that scene, saying, “It was so cold I thought I would die. But it was a scene that was very important to the drama’s development, so I was happy that the scene turned out wonderfully thanks to the strong winds.”

“Rebel: Thief Who Stole The People” premieres today, on January 30. Watch the trailer below!

Chae Soo Bin
Rebel: Thief Who Stole the People
How does this article make you feel?