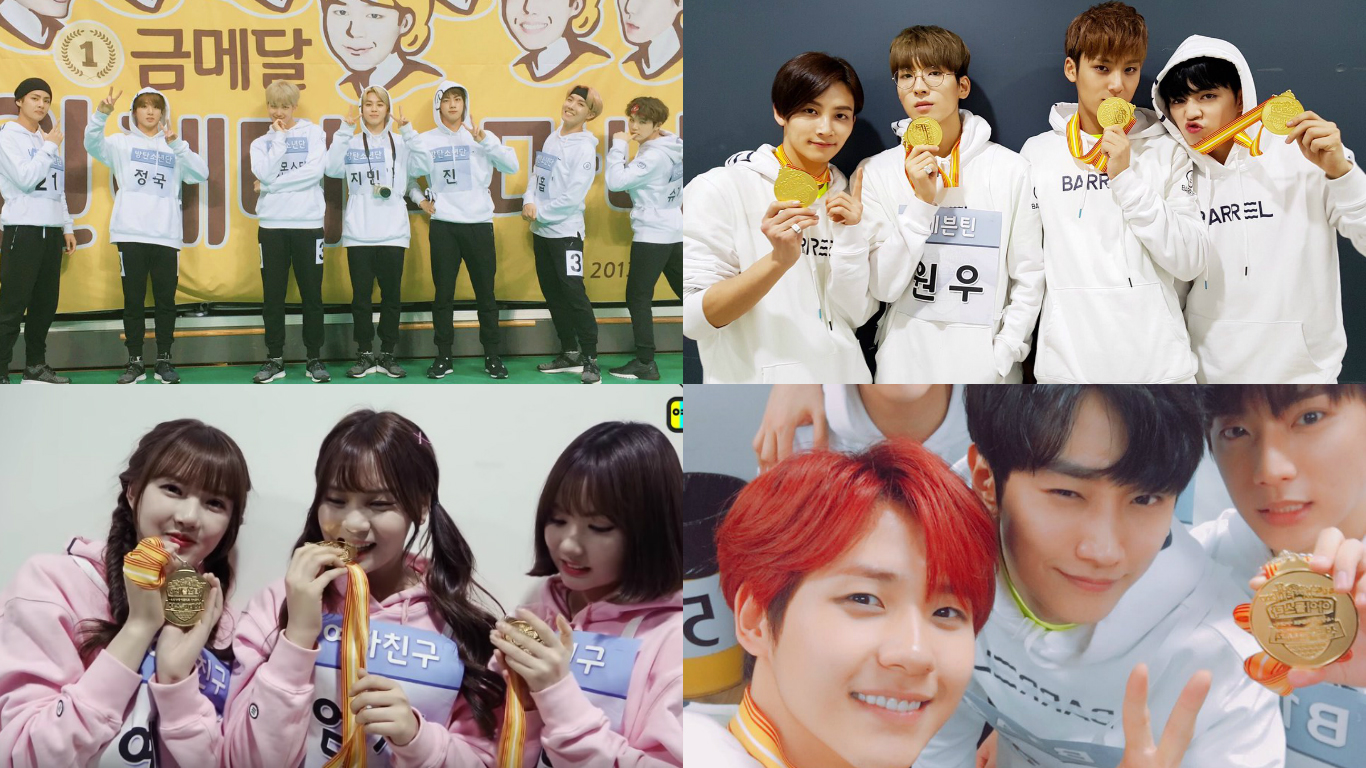 Many idols who took part in the “2017 Idol Star Athletics Championships” have taken to social media to share some more photos from the special event!

The Lunar New Year edition of the popular biannual sporting event aired on MBC on the afternoon of January 30, and featured idols competing against each other in track and field, archery, rhythmic gymnastics, and aerobics events.

When the events were filmed on January 16, many of the artists posted pictures to their Twitter or Instagram accounts while avoiding revealing any spoilers. In the hours before the show was broadcast on television, many idols used social media to encourage fans to tune in. Now that the episodes have wrapped up, fans have been gifted with more photos of the games from their favorite artists, with some of them showing off the shiny medals they won!

ASTRO shared some cute pictures both before and after the show aired, including a shot of member Cha Eun Woo with his MC cue card, and the guys displaying their gold medals from the aerobics event.

B1A4 showed off their gold medals from the men’s archery event through both group and solo photos!

BTS’s Jimin shared some photos of the group in front of their fan support banner at the event and laughed at Suga’s poses, as well as showed off the guys’ set up of an ARMY bomb (BTS’s official light stick) encircled by paper fans with their faces on them.

Cosmic Girls’s Cheng Xiao uploaded a shot with a cardboard cut-out version of herself from the rhythmic gymnastics competition before the show aired, and asked fans to watch.

She also posted a picture of herself with her hoop to Instagram, and wrote in the caption that she was disappointed with her performance this time around but promised to do better next time!

The group shared two photos of all of them together after the events as well, praising their members for doing a great job and wishing everyone a happy new year.

GFRIEND shared a behind-the-scenes look at the “2017 Idol Star Athletics Championships” in a fun video, which includes them celebrating their win in the women’s archery event and interacting with their fans.

Hello Venus posted some more shots from the events as well! Seoyoung and Yeoreum asked fans to tune in, and later on Seoyoung wrote that she had a lot of fun.

Pre-debut group H.U.B shared a photo on Facebook of member Rui (who made her solo debut last year) celebrating her impressive gold medal-winning run in the women’s 60 meter sprint. The group will be officially making their debut in February.

IMFACT tweeted out pictures from the competition as well, with Ungjae sharing some photos and writing, “Many people have been asking me if I’m okay, but I’m really alright.” He wrote in the captions, “I didn’t get hurt at all.”

Before the show began, KNK posted a group photo in front of their fan support banner, while holding up their support towels.

Heejun also shared a funny screenshot of the group looking as though they’re exploding during their aerobics performance, which he explained in another tweet had been sent by a fan.

LABOUM posted some pictures from backstage at the events before the special aired!

MADTOWN reminded fans to tune in to the show with a cute video of members Jota and Jun, in which Jota joked that they were there to represent all seven members of the group in the sprint event but his main goal was to beat Jun.

Jun made Jota laugh by replying, “I think I’ve already lost. I know I’m going to lose! But I’ll do my best for the fans who’ve been here to support us since the early morning.”

MONSTA X was also sure to tell fans to watch the show with a cute group photo, and I.M posted two selfies afterwards.

Oh My Girl celebrated their win in the women’s 400 meter relay and YooA’s first time competing in rhythmic gymnastics by sharing some pictures!

SEVENTEEN posted a photo of members Jeonghan, Wonwoo, Mingyu, and S.Coups with their gold medals from the men’s 400 meter relay with the caption, “We picked these up while we were running. Take them all, our Carats.”

SF9’s leader Youngbin took to Twitter to ask fans if they enjoyed watching the show. He also wrote, “It’s a shame that we couldn’t achieve good results, but I think that the process is more important than the results!!! Thank you so much for supporting us that day.”

SNUPER shared more photos from the day, and Woosung celebrated coming in first place in the men’s sprint with a series of selfies!

Teen Top’s Changjo also uploaded a photo with fellow member Ricky in their outfits from the aerobics event.

TWICE’s Mina posted a photo of herself with her gold medal from rhythmic gymnastics, thanking both her fans and fellow members for their support, and saying that all the participants worked hard.

UP10TION uploaded an album of photos to Facebook to give fans a glimpse of what went on behind-the-scenes at the events.

VICTON celebrated their first ever appearance at the sporting event with a photo of all their members during the opening ceremonies.

VIXX’s N also got fans excited for the show by posting a selfie with his MC cue card!

It looks like everyone had a great time during the “2017 Idol Star Athletics Championships”!

What was your favorite part?