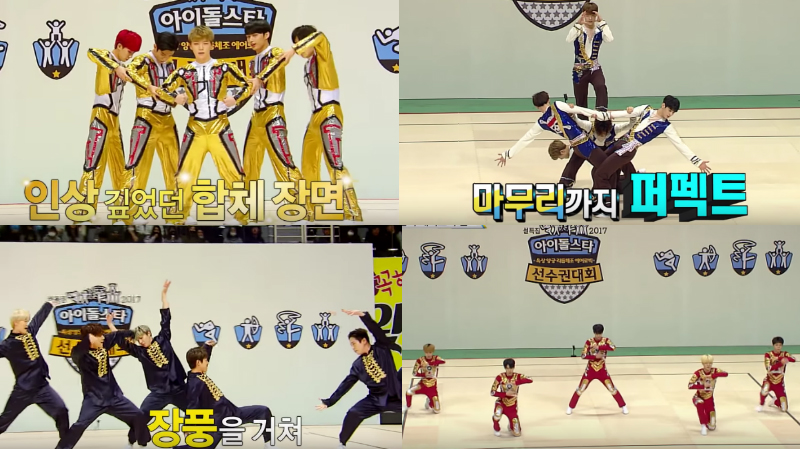 This season, six boy groups tried their hand at rhythmic aerobics for the very first time at the “2017 Idol Star Athletics Championships”!

This particular event aired on January 30, as a part of the Lunar New Year special, and featured Teen Top, ASTRO, SNUPER, B.A.P, KNK, and SEVENTEEN.

Teen Top started the show off with a classical music meets street dance performance. They first began moving to a medley of famous pieces from the album series, “Hooked on Classics,” which included pieces like Tchaikovsky’s “Piano Concerto No. 1 in B-flat minor,” and Gershwin’s “Rhapsody in Blue.” They creatively demonstrated aerobics inspired by the movements of an orchestra and conductor, as well as a powerful street dance portion.

ASTRO was next with an exciting and energetic performance influenced by “Pirates of the Caribbean.” With their strong and sharp movements, the boy group portrayed the waves of a sea, as well as a fierce sword fight. After a series of difficult synchronized movements, they broke out into a short dance break that they choreographed themselves. They ended on a high note with an impressive formation, and Moonbin’s wink.

SNUPER paid homage to Michael Jackson, with their stellar performance. Dressed in outfits that were reminiscent of something the king of pop used to wear, the group incorporated many of his signature moves along with their difficult stunts. Of course, their dance break section was also inspired by Michael Jackson as well, although they danced to “Uptown Funk” instead.

B.A.P made everyone smile along with them as they performed to a faster remix of “Kung-Fu Fighting.” In line with their concept, the group particularly included many movements that appear in martial arts, such as various stances and kicks. During one particular move, they all grinned while acting out Himchan overpowering them with his “energy.” They also added a more traditional street dance break, utilizing many b-boying techniques.

KNK became “superheroes” in their Iron Man-inspired show, with the perfect red-and-gold outfits. Despite their remarkable height, the group managed to execute flips and tricks just as well, all while re-enacting Iron Man in battle. The commentators praised them for their energy and efforts, while the audience cheered them on. The boy group was more laid-back during their dance break, before ending with a powerful stance.

SEVENTEEN was an undeniable crowd favorite, with their difficult performance that incorporated many unique and flashy aerobic movements and formations. Not only was their choreography impressive, it was set to an equally as intense music. Inspired by “Transformers,” they started things out with a TVXQ-like stance, before quite literally jumping into their energetic dance. All the members demonstrated great control, with The8 especially standing out.

In the end, SEVENTEEN and ASTRO both tied with 19.10 points, and the judges had to decide what would be the tie breaker. The judges ultimately decided to look at execution, and ASTRO won first place with the smallest difference, with their 9.45 points against SEVENTEEN’s 9.30 points (for execution specifically).