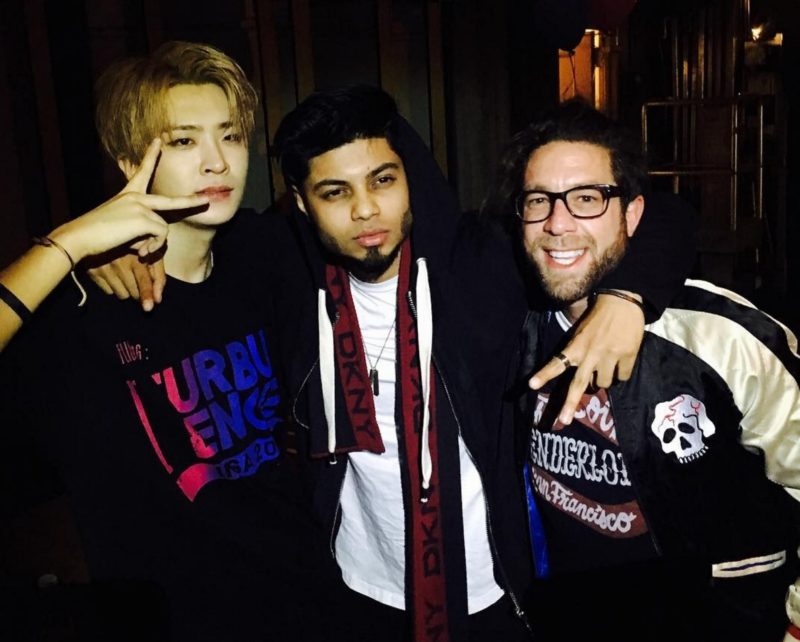 GOT7’s Youngjae Meets Elliott Yamin And Sanjoy Thanks To Fans

Being able to meet your idol in person is every fan’s dream, even for idols themselves.

Thanks to his fans, GOT7’s Youngjae had the chance to meet his idol Elliott Yamin. Youngjae had sung the American Idol singer’s hit song “Wait For You” at his audition for JYP Entertainment.

The encounter between the singers began with Youngjae posting a screenshot of Sanjoy’s song “Obvi,” featuring Elliott Yamin, on his Instagram. In the caption, Youngjae asked Elliott Yamin, whom he referred to as “Yamin Hyung (older brother),” to release a new album.

Fans then caught Elliott Yamin’s attention by tagging him in the comments. The friendly singer responded, and even brought Sanjoy into the conversation. Youngjae later invited the pair to GOT7’s fan meeting in Los Angeles on January 29, where they and the rest of GOT7 got to hang out together backstage.

This is Elliott Yamin’s retelling of this magical encounter:

Hey guys,so last night was a pretty special evening!..so here goes a story about how powerful and unifying music can truly be: Last week an artist named YoungJae @333cyj333 reached out to me on social media,posting a screen shot of my new song with Sanjoy called "Obvi" …he's a member of a K-Pop band called GOT7 …after direct messaging,we exchanged info and he proceeded to tell me that he auditioned for the band by singing my song "Wait For You" ….this is in Seoul Korea mind you,a country I have yet to visit or experience!!…fast forward to a couple of days later, he invites us to the #Got7 fan meet show last night at the Pasadena Civic,which just so happens to be where The Green Mile portion of American Idol was taped during my season…I hadn't been back there since!…so as some of my fondest memories were conjuring up as I walked into the auditorium,I couldn't help but think of how amazing this journey has been…the places it's taken me…the people I've met…people who've inspired me…people I've perhaps inspired,and touched in some small way with my music…and it was all playing out right in front of my eyes last night!…so,needless to say,we had a blast getting to meet YoungJae and the rest of the band members..I want to thank him,his team,and his endless community of fans for reaching out and making last night possible!..I am forever grateful! Namaste! #YoungJae #GOT7 #Sanjoy #ElliottYamin #Obvi #WaitForYou #Pop #Edm #soul #RnB #Dance #NewSong #NewMusic #Youngjae #youngjaegot7

Sanjoy also uploaded a short clip of the three jamming out on his Twitter:

Youngjae posted photos from the meeting on his Instagram and wrote, “Sad that there was no nice photo, even so [I still] liked it love you..”

Now we just have to keep our fingers crossed for an official collaboration between the three!

Thanks to Noemi for the tip!

GOT7
Youngjae
How does this article make you feel?