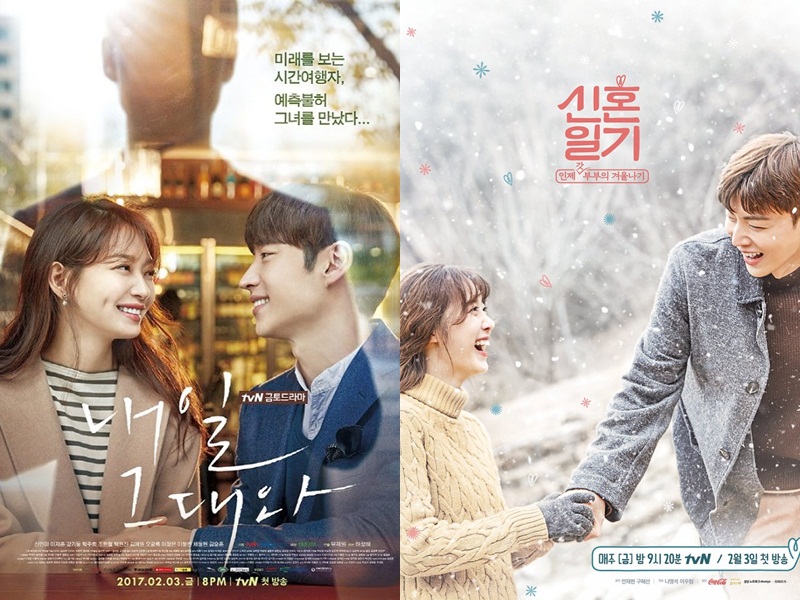 tvN’s Friday Night Lineup Hits The Jackpot With “Tomorrow With You” And “The Lovebirds: Year 1”

tvN’s Friday lineup has hit the jackpot once again. Lee Je Hoon and Shin Min Ah are leading the charge, with Ahn Jae Hyun and Ku Hye Sun following from behind. Though tvN’s Friday nights have gone through both a drama and variety show shakeup, it seems to be starting on the right foot.

Yoo So Joon (played by Lee Je Hoon) goes out to find Song Ma Rin (played by Shin Min Ah), the woman he dies with three years in the future. Song Ma Rin doesn’t know what to do with Yoo So Joon as she has no idea why he keeps following her. He does so because he believes she may be the key to understanding how he ends up dying. Anticipation is high as viewers are set to watch love bloom between a woman and a man who travels back in time to save her.

The first episode of “Tomorrow With You” scored viewership ratings of 3.9 percent, hitting 4.6 percent at its peak. As expected for the follow-up of tvN’s hit series “Goblin,” the drama is off to a good start.

Following the production was the winter love story between Ahn Jae Hyun and Ku Hye Sun in “The Lovebirds: Year 1.” The couple settled into their temporary home in Gangwon-do, and the romantic backdrop and background music helped amplify the duo’s charms. Ku Hye Sun’s easy-going and bold personality has especially captivated viewers. The first episode garnered a lot of attention, with average ratings of 5.6 percent and peak statistics at 7.3 percent.

“Tomorrow With You” will continue to lead viewers on a romantic journey that ends with “The Lovebirds: Year 1.” With both shows becoming a hit online, many are excited to see how well they will do in the coming weeks.

Watch “Tomorrow With You” on Viki exclusively in Europe!