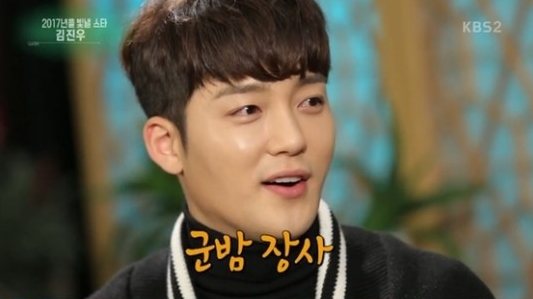 Actor Kim Jin Woo opened up about his pre-debut days before he was able to make it on the small screen.

The February 4 episode of KBS2’s “Entertainment Weekly” featured an interview with the actor, who talked about the many part time jobs he’s had to do over the years, revealing, “Everything that you know of, I’ve tried.”

When asked if there was one in particular that was difficult, he said, “Selling roasted chestnuts. It was so cold that I suffered from frostbite. I sold nearly nothing for three months before I finally came up with a strategy.”

He said, “I smiled broadly and asked if they wanted to try out a chestnut first. There were a lot of older women [who liked that].”

Continuing, he revealed, “I think that’s around the time when I started to get more opportunities to star on daily dramas.”

Entertainment Weekly
Kim Jin Woo (1983)
How does this article make you feel?