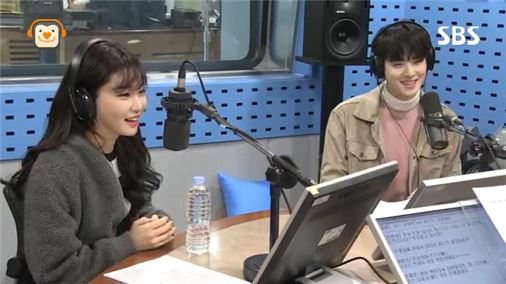 Former I.O.I member Kim Chungha and ASTRO’s Cha Eun Woo made an appearance on the February 7 radio broadcast of SBS Power FM’s “Choi Hwa Jung’s Power Time.” They chatted about topics like life as an idol trainee and family relations, among others.

In response to a question asking Kim Chungha about her first impressions of Cha Eun Woo, she candidly stated, “I think he’s as good looking as they say he is.”

Cha Eun Woo returned the compliment, claiming, “I’ve heard a lot about Kim Chungha from Choi Yoojung and Kim Doyeon. They told me that she’s a teammate they really rely on and trust. Also, she’s familiar with our group member Jinjin, so I was glad to meet her.”

Former I.O.I members Choi Yoojung and Kim Doyeon are labelmates with Cha Eun Woo at Fantagio, which explains the link between him and Kim Chungha.

Meanwhile, Kim Chungha will be making a solo debut sometime in the first half of 2017.