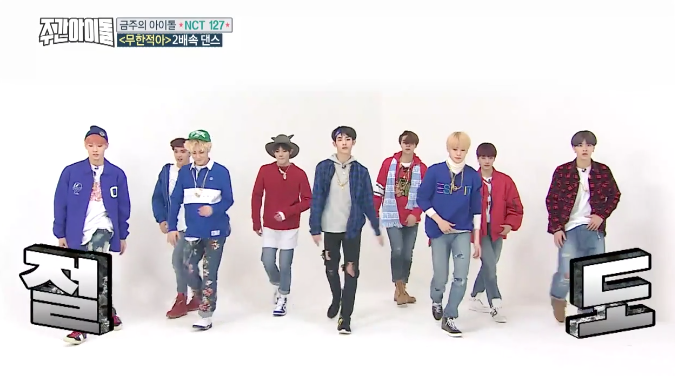 On the February 8 broadcast of “Weekly Idol,” NCT 127 appeared on the show and performed their song “Limitless” at twice the speed.

The members were a bit nervous when they got a taste of how fast the beat was ahead of their performance, but Taeyong shouted, “We can do it! We can do it!”

Once they started dancing, they did extremely well despite their worries. Even though the choreography was very difficult considering the fast rhythm, the members continued to smile during the performance and stayed in perfect sync.

Their moves looked so difficult that hosts Defconn and Jung Hyung Don said, “Wow, this looks so hard. There is so much choreography in this song!”

After the song ended, the group received a huge round of applause and Jung Hyung Don said once again, “Out of the many dances I’ve seen, I think this one had the most difficult choreography.”

Watch their amazing performance below:

Weekly Idol
NCT 127
How does this article make you feel?