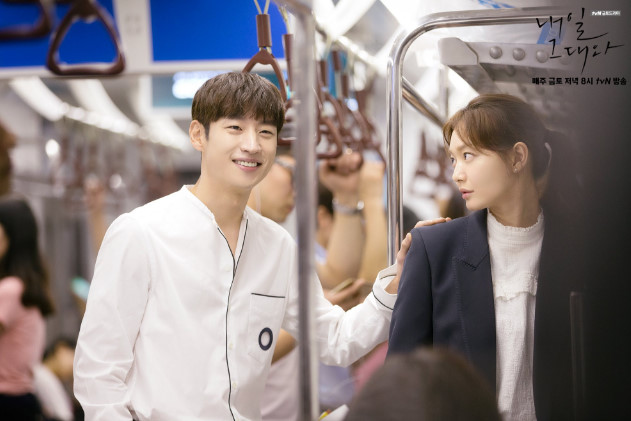 “Tomorrow With You” is turning out to be a very unconventional love story!

At the end of episode two of the tvN drama, time traveler Yoo So Joon (Lee Je Hoon) realized that he and Song Ma Rin (Shin Min Ah) both barely survived the same subway crash seven years before. Upon learning their connection, he frantically hunted her down and formally gave her his name.

Episode three, which airs February 10, focuses on Yoo So Joon’s struggle to stop a future accident from ever happening. This crash, which will occur on March 25, 2019, is currently when he will die.

“I have only seen someone avoid the destiny of death once,” Doo Sik, another time traveler, tells Yoo So Joon. Instead, he suggests that the two change their future by having a baby together.

The suggestion makes quite an impact on a flustered Yoo So Joon, but over time, Doo Sik’s advice becomes more and more appealing. Now he must convince Song Ma Rin to fall in love with him. However, she currently does not think too fondly of him, especially after he brushed her off at a wedding they both previously attended.

Catch the latest episode of “Tomorrow With You” on Viki, exclusively in Europe!