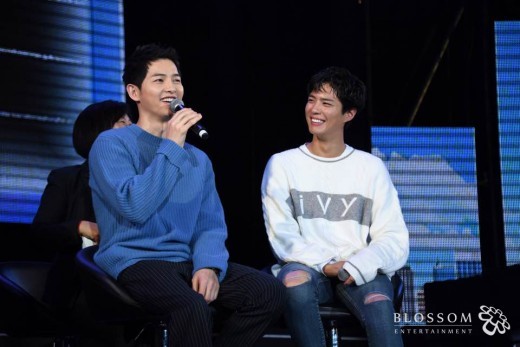 Thai fans were treated to a huge surprise at Park Bo Gum’s fan meeting on February 11, when Song Joong Ki popped in as a surprise guest. His appearance had been kept strictly confidential, so only a few fans knew about it beforehand.

Song Joong Ki was also a guest at Park Bo Gum’s Taiwan fan meeting last month on January 23. By lucky coincidence, the actor also had schedules in Taiwan and Thailand, so he coordinated his schedule in order to attend the fan meetings.

As expected, the star was received with thunderous cheers when he appeared. Back when he had a fan meeting in the country after “Descendants of the Sun,” the airport had been jam-packed with fans when he touched down.

During the fan meeting, Song Joong Ki and Park Bo Gum showed great chemistry as they played games like the OX game and the cushion game (where each team aims to flip all the cushions on the floor to the team’s assigned colour). They also drew portraits, and Song Joong Ki, whose skills have been improving steadily, joked, “Park Bo Gum is perfect in everything except his drawing skills. I’m willing to teach him.”

Park Bo Gum’s Asia tour will end next month with his fan meeting in Seoul on March 11, while Song Joong Ki is currently reviewing his next film after “Battleship Island.”