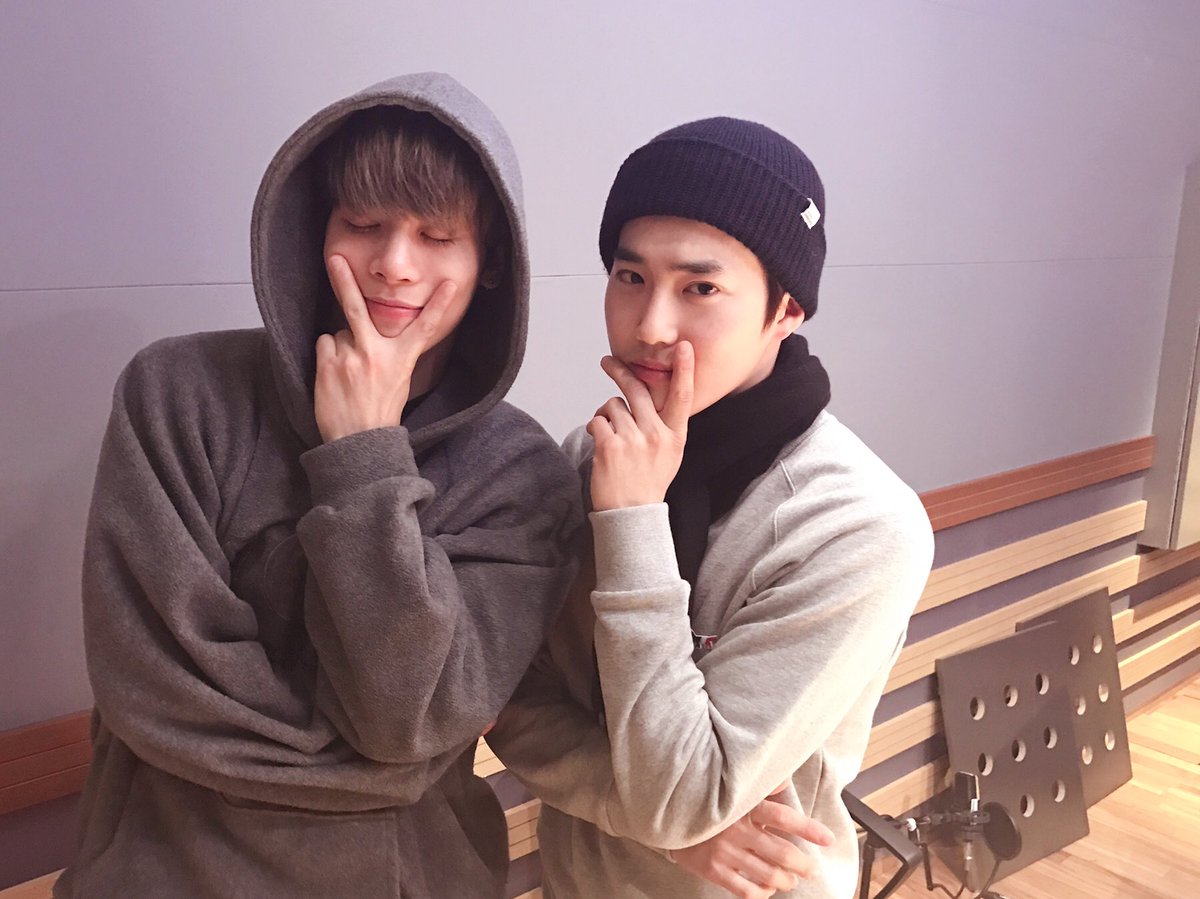 On the February 13 broadcast of MBC FM4U’s “Blue Night,” hosted by SHINee’s Jonghyun, EXO’s Suho made a guest appearance and discussed his latest solo activities as well as some of his recent hobbies.

Suho explained that the reason he agreed to appear on “Blue Night” is because “Jonghyun is not only my industry senior, but also a best friend who I spent my years as a trainee with.” He continued, “We were really close back then, now we’re only ‘just’ close. I’m just joking, we’re still really close, but it’s harder to see each other these days. In the past, we used to practically live together.” He added that it was nice to see his friend again, and that Jonghyun made him feel comfortable even though it was a solo radio appearance.

While talking about how busy EXO is even when they’re not promoting music, the singer semi-joked that there was one place they all had in common besides their dorms: the gym. With almost five years under their belt, he went on to talk about how he hoped they would continue as EXO for a very long time, without any major injuries.

“EXO is family. Honestly, all the members are really like family to me now. The good and the bad, all forms of affection exist in our relationship. I think we’ve become a family where we respect each other and can really understand everything little thing [about one another],” Suho stated.

The idol leader also hinted that EXO would be returning to the music scene sometime in the summer, which is why they’ve been given more free time these past two months.

When Suho sheepishly admitted he was the one, the SHINee member poked fun at his friend and said, “I knew it was you. It sounds so ‘Suho’-like. [When I first heard it,] I was like, ‘What is this? Did Joonmyun make it or something?” Suho revealed that he was worried that the other members would think it was too cheesy, but they all agreed to it right away.

Throughout the broadcast, Jonghyun and Suho proved that their friendship wasn’t just by word-of-mouth, and kept making fun of each other as only friends could.

May these friendships last!

EXO
SHINee
Jonghyun
Suho
Blue Night
How does this article make you feel?