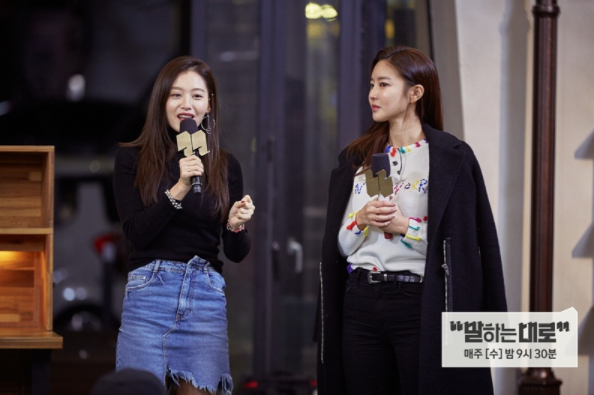 NS Yoon-G recently talked about dealing with stress and lack of popularity.

The singer is set to appear on the JTBC program “Talking Street” on February 15. During the recording, she carefully asks, “Do you know who I am? It’s been eight years since I’ve promoting as a singer, but I have become an issue for being the older cousin of former KARA member Kang Ji Young, the second-generation Son Dambi, and for my body.”

She continues, saying, “One day I searched up my name and saw a related search term that said ‘The reason why NS Yoon-G is not getting popular.’ From the moment I began thinking that the public felt sorry for me, I started receiving too much stress. The sky was spinning and I began to vomit. I went to the hospital and was diagnosed with Otolithiasis. Afterwards I left for the United States as if I was running away. But I decided that I would judge myself by my own standards.”

Then a suspicious woman with a black hat raises her hand to ask NS Yoon-G a question. In response, NS Yoon-G laughs and reveals that the woman is her best friend Kim Jaekyung, the former leader of girl group Rainbow.

Kim Jaekyung then talks about NS Yoon-G, saying, “Yoon-G worried a lot. I wanted to give her courage to finish a challenge and start a new beginning. We’ve been friends for eight years, but for the past five years on December 31, we’ve talked about why we weren’t popular.”

NS Yoon-G’s friendship with Kim Jaekyung can be seen on JTBC’s “Talking Street” on February 15 at 9:30 p.m. KST.

Source (1)
*A previous version of this article incorrectly stated that the name of the show was “As One Says” instead of “Talking Street.”
Kim Jaekyung
NS Yoon G
Talking Street
How does this article make you feel?