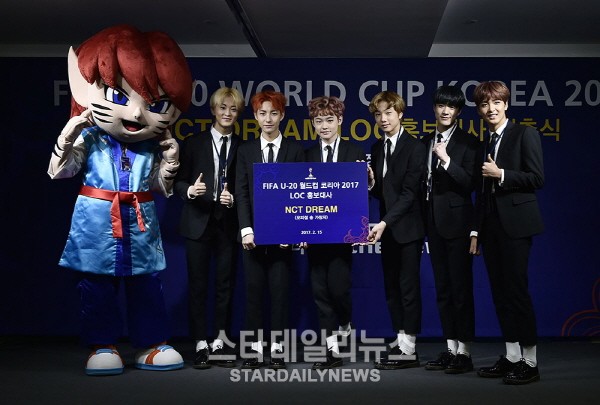 As announced at the soccer conference on February 15, NCT Dream will be one of the ambassadors for the organizing committee of the upcoming 2017 FIFA U-20 World Cup Korea games.

The group will also be singing the official theme song for the whole tournament, which was briefly revealed at the conference. The song will be used in promotional campaigns as well as during the matches.

NCT Dream stated that it was an honor for them to have this opportunity, and hoped that their song would energize not only the athletes, but everyone who loves soccer as a whole.

As the vice chairperson of the organizing committee, Kwak Young Jin explained, “As NCT Dream is all under the age of 20, they have many similarities [with our athletes] as stars who have potential for the future. NCT Dream’s official song encompasses all six members’ bright energy, and I hope that it will be heard in every part of our country.”

Star Daily News
NCT DREAM
How does this article make you feel?