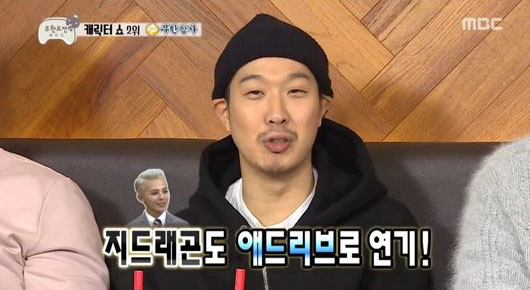 A portion of the February 18 episode of “Infinite Challenge” was dedicated to memorable special characters who appeared on the program’s two-part mini movie “Muhan Company.” Among those selected was G-Dragon, who made his acting debut through the special.

Cast member Kwanghee asked if G-Dragon had ad-libbed during his appearance, to which Haha responded, “He ad-libbed! He was only given the situation, and then he actually ad-libbed the rest.”

Haha has not been the only person with good things to say about G-Dragon’s appearance. Earlier last year, “Muhan Company” director Jang Hang Joon also praised his performance, calling him “a professional, for sure.”

Watch what else the cast reveals on the latest episode of “Infinite Challenge” below!

G-Dragon
HaHa
Infinite Challenge
How does this article make you feel?