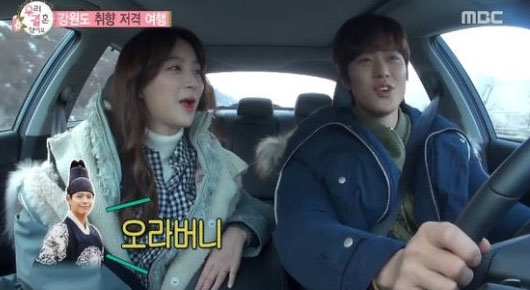 On the February 18 episode of “We Got Married,” the actress hit the road with her virtual husband Gong Myung, and they headed out on a romantic trip to Gangwon. The couple remained adorably affectionate on the long drive, sharing conversation and even holding one another’s hands while Gong Myung drove.

During one point in the conversation, Jung Hye Sung brought up her former castmate Park Bo Gum, who played her older brother in the popular historical drama “Moonlight Drawn by Clouds.”

“He’s told me, ‘You’re not too affectionate, right? I’ll have to visit your house sometime. My brother-in-law has to earn the family’s approval,'” she amusingly warned, and added that he still considers himself her brother.

In response, Gong Myung readily told her to tell Park Bo Gum he said, “Thank you,” and that the actor is always welcome to come visit on the show.

Check out the full episode of “We Got Married” below!

Do you think Park Bo Gum will make a special appearance on the show?

Park Bo Gum
Gong Myung
Jung Hye Sung
We Got Married
How does this article make you feel?