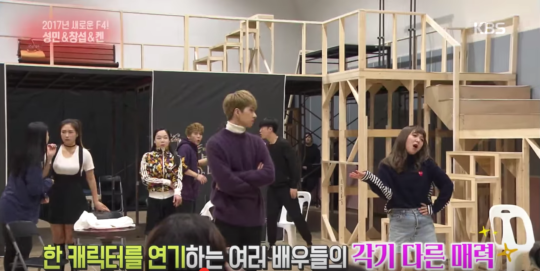 The reporter noted that Ken had played a prince in the “Cinderella” musical and asked how much of his real personality synchronized with the role of a chaebol heir.

When Changsub was asked how he was cast for his first-ever musical, he said, “My company got me the role…”

He added, “It’s my first musical and I’m playing a lead role so I feel a big burden, but it inspires me to practice more.”

The boys are also asked to sing some pop songs in a “musical” style. Ken takes on “Sorry Sorry” in honor of Super Junior’s Sungmin, while Changsub tries to sing VIXX’s “The Closer.” Although the latter was a bit of a failure, Sungmin tried to prop his colleague up, saying, “It was like watching ‘Jekyll and Hyde.'”