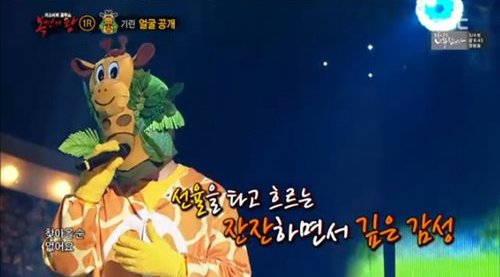 The episode of MBC’s “King of Masked Singer” that aired on February 19 included the reveal of “Giraffe” as a popular singer-songwriter who is one half of a much beloved duo.

The third battle of the first round had “Elephant” and “Giraffe” battle it out, performing Nami’s “Round and Round.” The duo gave an exciting and fun performance that showcased great teamwork between the two.

“Elephant” won the round by a vote to 64 to 35, moving on to the next round in the competition. Performing Lee Moon Sae’s “Girl,” “Giraffe” took off his mask to reveal none other than Akdong Musician’s Lee Chan Hyuk. 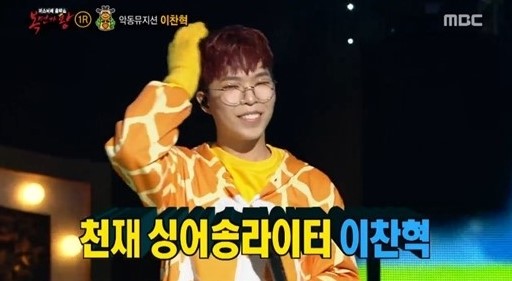 When asked why he decided to appear on the show, Lee Chan Hyuk explained, “My younger sister is always praised for her vocal talent, and I sometimes feel like I’m pushed to the side. I wanted to gain some confidence through this show.” He called back to a comment Seol Woon Do had said as a panel member when he jokingly added, “I wanted to be evaluated for my singing, but I ended up hearing that they thought I wasn’t a singer.”

Coming down from the stage, the singer said, “This is the first time I’ve received applause by myself. It felt nice to have a stage of my own, and to have the audience’s ears directed only at me. It felt like I’d become the main character.”

He concluded with, “I saw the look in people’s eyes and it was a positive one. I’ll work hard to grow as a singer with a definitive and unique color.”

AKMU
Lee Chan Hyuk
The King of Mask Singer
How does this article make you feel?