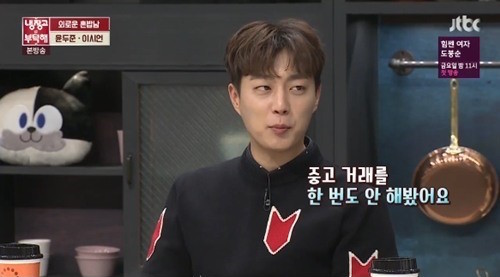 Who needs arcades and gaming centers when you have BEAST’s Yoon Doo Joon?

During his guest appearance on the February 20 episode of JTBC’s “Please Take Care of my Refrigerator,” the idol talked about electronics that are commonplace in today’s society with the rest of the cast members.

When Yoon Doo Joon was talking about how he’s personally “never bought any [electronics] secondhand,” host Kim Sung Joo questioned if the BEAST leader really used to own six computers at once.

After a bout of uncontrollable laughter, Yoon Doo Joon explained, “I used to have six, but now I only own two computers. When I was young, it was my dream to have many computers in my house so that I could play with my friends at home like it was a PC room (gaming center).”

Almost immediately, the studio broke out into agreement as they imagined how fun that would be.

Would you like to set up a mini gaming center in your home?

Please Take Care of My Refrigerator
BEAST
Yoon Doo Joon
How does this article make you feel?