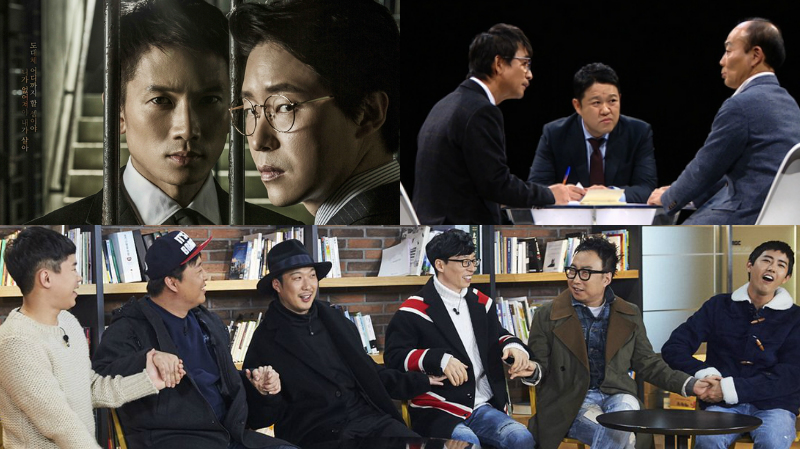 Gallup Korea has once again complied the results from its monthly survey of the most popular Korean television programs.

For February, 1,003 domestic Korean viewers voted for their favorite shows, which not only included dramas and variety programs, but also culture shows as well.

JTBC’s “Ssulzun,” a talk show that solely focuses on social commentary, took first place with 11.2 percent of the votes. This marks the first time a program centered around current events has placed first in this monthly-conducted survey.

The show first premiered back in 2013, and while its overall popularity was on-and-off for a couple of years, a panel change in January 2016 caused it to enter the top 10 and has consistently maintained a similar position since then. It recently increased to being one of the top three most-loved Korean television programs during the past three months.

Despite being on a seven-week long broadcasting hiatus, “Infinite Challenge” has maintained its spot in second place for the month of February. Always a crowd favorite, the variety show previously was first place for an impressive 27 months, until “Goblin” overtook it just last month, in January 2017, as the most-voted program. 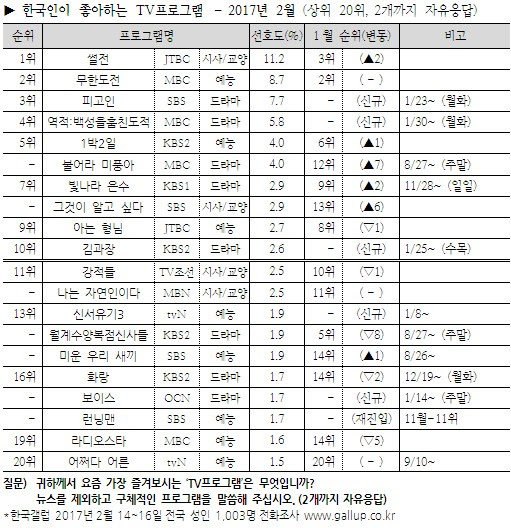 Monday-Tuesday evening dramas seem to be the major contenders from the small screen, as KBS, SBS, and MBC’s productions from this time slot have all placed in the top 20. New additions on the chart, “Defendant” took the slight lead in third place, followed by “Rebel: Thief Who Stole the People” right behind it in fourth place. Meanwhile, the recently-ended “Hwarang” placed 16th.

Other dramas in the top 10 included “Chief Kim” in 10th place, “Still Loving You” in seventh place, and “Blow Breeze” in fifth place, tied with KBS2’s outdoor variety program “2 Days & 1 Night.” Another culture show, “We Want to Know,” also placed seventh, while variety show “Ask Us Anything” came in at ninth place.

Some more new additions to the overall top 20 chart are “New Journey to the West 3” at 13th place, and OCN’s crime thriller drama “Voice” tied for 17th place with SBS’s “Running Man.”

What were some of your favorite shows in February?

2 Days &amp; 1 Night
Infinite Challenge
Ssulzun
Defendant
Rebel: Thief Who Stole the People
How does this article make you feel?