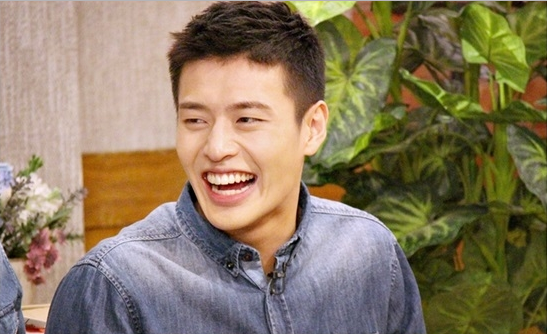 No matter what he says, Kang Ha Neul is definitely a kind person!

On the February 23 episode of KBS2’s “Happy Together,” the actor was one of the featured guests along with Han Jae Young, Super Junior’s Leeteuk and Shindong, Kim Seul Gi; and Ha Jae Sook.

During the broadcast, the cast members brought up a “moving story about an air conditioner” that is associated with Kang Ha Neul.

The story went, when he heard that a film staff member he knew worked at a part-time at a cafe, and didn’t have an air conditioner at their house, the actor gifted that staff member with a new air conditioning unit.

“After that, there was a side effect. Other staff members would try to convince me and jokingly comment things like, ‘These days my car doesn’t run,'” Kang Ha Neul commented.

In an attempt to change his image, the actor insisted, “I am not someone who lives a kind life!” and added that he couldn’t be compared to people like Yoo Jae Suk or Park Bo Gum.

Hilariously, the other guests and cast members immediately started joking around after his tale, and tried to self-promote themselves so that they could benefit from Kang Ha Neul’s kindness as well.

Happy Together
Kang Ha Neul
How does this article make you feel?